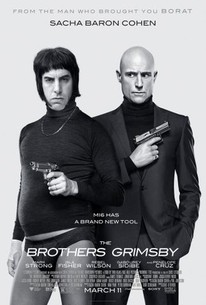 Critics Consensus: The Brothers Grimsby showers viewers with a steady stream of Sacha Baron Cohen's edgy humor, but too many gags hit the wrong side of the line between audacious and desperate.

Critics Consensus: The Brothers Grimsby showers viewers with a steady stream of Sacha Baron Cohen's edgy humor, but too many gags hit the wrong side of the line between audacious and desperate.

Critic Consensus: The Brothers Grimsby showers viewers with a steady stream of Sacha Baron Cohen's edgy humor, but too many gags hit the wrong side of the line between audacious and desperate.

Nobby (Sacha Baron Cohen), a sweet but dimwitted English football hooligan, reunites with his long-lost brother Sebastian (Mark Strong), a deadly MI6 agent, to prevent a massive global terror attack and prove that behind every great spy is an embarrassing sibling. Nobby has everything a man from Grimsby could want, including 11 children and the most gorgeous girlfriend in the northeast of England (Rebel Wilson). There's only one thing missing: his little brother, Sebastian, who Nobby has spent 28 years searching for after they were separated as kids. Nobby sets off to reunite with Sebastian, unaware that not only is his brother MI6's deadliest assassin, but he's just uncovered plans for an imminent global terrorist attack. On the run and wrongfully accused, Sebastian realizes that if he is going to save the world, he will need the help of its biggest idiot.

Gabourey Sidibe
as Banu the Cleaner

Jordi Castello
as Head of Security

Raheem Sterling
as Himself

Sam Redford
as Officer on Megaphone

News & Interviews for The Brothers Grimsby

View All The Brothers Grimsby News

Critic Reviews for The Brothers Grimsby

A couple of funny scenes, but it's amazing how quickly Sasha Baron Cohen's comedy has grown safe and stale.

Cohen, brilliant in his craftier and more avant-garde shock-humor roles, is too irritating to make this character likable, much less lovable as the story demands.

The joke at the heart of Sacha Baron Cohen's new comedy The Brothers Grimsby [is] an enjoyable one, even when the film as a whole weaves between being just hilariously foul and incoherently sloppy.

Mostly, The Brothers Grimsby simply wants to make you laugh. And it will.

A production that fails in every way at every turn.

You will not be chin-scratching while watching this in the manner of someone reviewing a lost black and white epic from 1928. The only things being scratched anywhere near this filth will be someone's slightly grubby Y-fronts. And yet, and yet...

Just expect to feel dirty, guilty and offended afterwards, and you'll have a great time with Grimsby.

In bad taste barely begins to describe some of the scenes.

What Baron Cohen has added to film comedy in the last decade is not insignificant, but it seems that the joke is reaching its end, but without a good punch line in sight.

The Brothers Grimsby contains some of the most lowbrow humor imaginable, and it's usually outrageous fun

The shaming truth is that I was amused; so amused that on several occasions I had to wipe tears of laughter from my eyes. The fact that I knew deep down that I really shouldn't be laughing at all just made it funnier.

Audience Reviews for The Brothers Grimsby

There are some (emphasis on 'some') good moments in Grimsby. I sniggered twice (and would have a third time if that moment hadn't already been in the trailer) and there are a couple of surprisingly solid action sequences, primarily the ones with Mark Strong helming them. That said, I still didn't like the movie. It's oft lazy and the quote unquote "humour" is almost entirely of the gross-out variety. It's like "HEY LOOK A DICK! HEY LOOK SOME POOP! FUCK YOU GIVE US YOUR MONEY!". Must admit, I've never seen a "football hooligan/espionage/action-thriller/adult-comedy/family drama" before though.

A vile and disgusting film (which is to say a Sacha Baron Cohen film), The Brothers Grimsby is extraordinarily vulgar. Nearly all of the comedy is gross-out humor (mostly sexual) and the characters are ridiculous over-the-top. And the plot is painfully formulaic from start to finish. Going out of its way to be as offensive a possible (and then some), The Brothers Grimsby is just awful.

Mark Strong finally gets decent face time in front of the camera, and it's in this turd, which is less than a real comedy film effort but rather more a nod to England, Cohen mouthing the sentiment that he hasn't gone Hollywood, but in fact remembers where he came from. Everyone's a good sport throughout the drearily infantile proceedings but that's about all that recommends this lacklustre effort that's mainly groanworthy.