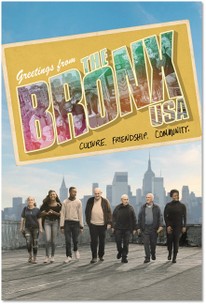 From the team behind HBO's "If You're Not in the Obit, Eat Breakfast," THE BRONX, USA follows producer George Shapiro as he returns to his hometown of the Bronx. Revisiting the streets, stores and memories of his childhood, Shapiro reflects on the singularity of the borough he grew up in and the close friendships he made there that have stood the test of time. A love letter to a special part of New York City and its distinctive residents, the documentary also introduces the next generation of Bronx-ites -- the 2017 graduating class of DeWitt Clinton High School, who may come from different backgrounds from Shapiro's class of 1949, but whose passion, drive and emphasis on the power of friendship connects them with the seniors who came nearly seventy years before them.

News & Interviews for The Bronx, USA

View All The Bronx, USA News

Critic Reviews for The Bronx, USA

Offers an alternately moving and amusing exercise in infectious nostalgia that should prove appealing even to viewers who weren't in the 1949 graduating class of DeWitt Clinton High School.

As metaphors for America go, it might just put a hopeful smile on your face after another stomach-churning political news day.

A pleasing nostalgia laden documentary about a once acclaimed high school in the Bronx.

There are few movies that will talk about The Bronx with more joy than The Bronx, USA.

Anne Brodie
What She Said
View All Critic Reviews (5)

There are no featured reviews for The Bronx, USA at this time.