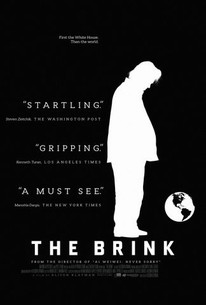 Critics Consensus: The Brink won't change many minds about its subject, but it remains a compelling -- if perhaps difficult to watch -- look at a divisive ideological lightning rod.

Critics Consensus: The Brink won't change many minds about its subject, but it remains a compelling -- if perhaps difficult to watch -- look at a divisive ideological lightning rod.

Critic Consensus: The Brink won't change many minds about its subject, but it remains a compelling -- if perhaps difficult to watch -- look at a divisive ideological lightning rod.

When Steve Bannon left his position as White House chief strategist less than a week after the Charlottesville "Unite the Right" rally in August 2017, he was already a notorious figure in Trump's inner circle, and for bringing a far-right ideology into the highest echelons of American politics. Unconstrained by an official post -- though some say he still has a direct line to the White House -- he became free to peddle influence as a perceived kingmaker, turning his controversial brand of nationalism into a global movement. THE BRINK follows Bannon through the 2018 mid-term elections in the United States, shedding light on his efforts to mobilize and unify far-right parties in order to win seats in the May 2019 European Parliamentary elections. To maintain his power and influence, the former Goldman Sachs banker and media investor reinvents himself -- as he has many times before -- this time as the self-appointed leader of a global populist movement. Keen manipulator of the press and gifted self-promoter, Bannon continues to draw headlines and protests wherever he goes, feeding the powerful myth on which his survival relies.

News & Interviews for The Brink

Dumbo Is Visually Impressive but Falls a Little Flat

View All The Brink News

Critic Reviews for The Brink

What emerges from Klayman's film is how very important Brexit Britain is as a self-vivisecting research animal in Bannon's experimental thinking.

It's not a film that's going to change minds, and it has been produced to be consumed by Bannon's enemies rather than his friends.

This is, at best, morally slippery film-making.

Aside from Bannon's own weird magnetism - it's fascinating to see the way he attracts some as strongly as he repulses others - there isn't much reason why this isn't a magazine article instead of a movie.

With Klayman using the man's own words against him, Bannon comes off as a wallower in the mire.

If the barest elements of political psychology and social pathology are suggested in the course of the film, they're undercut and banalized by the movie's homogenized aesthetic...

Editing is the best tool that [Alison] Klayman has at her disposal. Led by Brian Goetz, it draws out common themes and strands from the vast web of footage she accumulated.

What's in this movie is very, very damning stuff.

This is fascinating and horrifying at the same time. It leaves you kind of feeling sick.

A solid but unremarkable documentary that could have pushed back harder with some commentary from the director, Klayman.

An intimate visit into the house of a feared man that holds no boundaries when playing for his cause. So honest it's scary. [Full review in Spanish].

While The Brink highlights Steve's hypocrisy and thinly veiled racism early on, what shows [director Alison] Klayman's restraint and talents as a filmmaker, is also the balance she gives.

Audience Reviews for The Brink

There are no featured audience reviews yet. Click the link below to see what others say about The Brink!