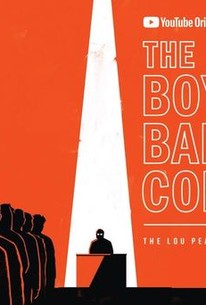 In the 1990s, boy bands were king. Groups like N'SYNC and the Backstreet Boys were international sensations. But that wasn't the whole story. To tell the whole story, you have to talk about Lou. Lou Pearlman was the producer behind the pop explosion of the early 90s, but he was anything but an artist. In fact many would might call him a monster.

It may be an all-too-familiar refrain - trusted music manager rips off his clients - but "The Boy Band Con: The Lou Pearlman Story" sets it in the broader, more intriguing context of the age-old pursuit of those twin trappings, fame and fortune.

As Kunkel structures the doc, it's like "Here's this guy who nobody completely understands, now let's go back in time and ... nobody understood him then, either." I prefer that to cheap and specious psychoanalyzing.

The man behind *NSYNC and Backstreet Boys is revealed as a master fraudster in this absorbing documentary.

In an increasingly competitive genre, a really bad guy at the center of your scam documentary isn't enough to make it stand out.

Ultimately, The Boy Band Con struggles to find the balance between a real-life showbiz story and a more serious story about a serial embezzler.

It's more like a primer on Pearlman for those who haven't thought about boy bands since the 90s than a provocative true crime investigation.

The Boy Band Con is a strong crash course in learning about the boy band world, but it feels like much is left unspoken.

Enthralling and eye opening. Few titans and villains of industry are as complicated and varied as Pearlman, and the interconnected nature of his deceptions haven't been as thoughtfully and personally outlined before now.

It's as fascinating as it is gut wrenching.

The Boy Band Con's most remarkable feat is showing how Pearlman's two crowning achievements were merely cogs in the vast machinery of his deception.

In this case, the truth is definitely stranger than fiction.

There are no featured audience reviews yet. Click the link below to see what others say about The Boy Band Con: The Lou Pearlman Story!