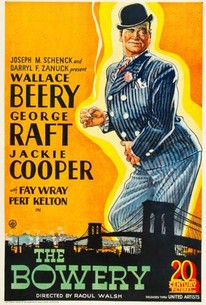 In this rough-and-tumble action comedy, Chuck Connors (Wallace Beery) and Steve Brodie (George Raft) are friendly rivals on New York's Bowery in the 1890s. Connors owns a fancy tavern and looks after a streetwise kid named Swipes McGurk (Jackie Cooper), while Brodie is a daredevil willing to do nearly anything to get the better of Connors. When both men fall in love with Lucy Calhoun (Fay Wray), who has fallen on hard times, Brodie takes her under his wing and helps get her back on her feet. Connors is furious that his rival has won her heart, so he goads Brodie into doing something spectacular to prove his love for her -- jumping off the Brooklyn Bridge, for example. Reckless but not stupid, Brodie has no intention of making the jump and plans to use a dummy instead, but when Connors and his henchmen show up to make sure that Brodie doesn't back down, the dare is turned into a wager, and Brodie emerges the new owner of Connors' bar after successfully making the jump. In real life, George Raft and Wallace Beery were not nearly so friendly as their characters: Raft persuaded director Raoul Walsh to hire a number of his underworld cronies as extras, which irritated Beery no end. When the two actors had a fight scene, Beery refused to hold back, and the staged fistfight quickly turned into a for-real battle royale.

Tammany Young
as Himself

Esther Muir
as The Tart

John Bleifer
as Mumbo the Mute

Irving Bacon
as Hick with Tailors

Charles B. Middleton
as Detective

Charles Lane
as Doctor
View All

Critic Reviews for The Bowery

The casual and constant violence, the drunkenness and gambling, the punished, unkempt bodies, and the mercurial swings between gutter and glory make Walsh's raw, raunchy film the authentic "Gangs of New York."

Failed low brow comedy is done in by racism.

Audience Reviews for The Bowery

There are no featured audience reviews yet. Click the link below to see what others say about The Bowery!