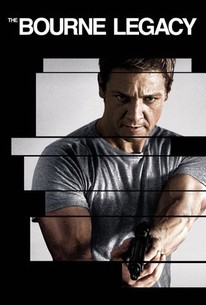 Critics Consensus: It isn't quite as compelling as the earlier trilogy, but The Bourne Legacy proves the franchise has stories left to tell -- and benefits from Jeremy Renner's magnetic work in the starring role.

Critics Consensus: It isn't quite as compelling as the earlier trilogy, but The Bourne Legacy proves the franchise has stories left to tell -- and benefits from Jeremy Renner's magnetic work in the starring role.

Critic Consensus: It isn't quite as compelling as the earlier trilogy, but The Bourne Legacy proves the franchise has stories left to tell -- and benefits from Jeremy Renner's magnetic work in the starring role.

The narrative architect behind the Bourne film series, Tony Gilroy, takes the helm in the next chapter of the hugely popular espionage franchise that has earned almost $1 billion at the global box office: The Bourne Legacy. The writer/director expands the Bourne universe created by Robert Ludlum with an original story that introduces us to a new hero (Jeremy Renner) whose life-or-death stakes have been triggered by the events of the first three films. For The Bourne Legacy, Renner joins fellow series newcomers Rachel Weisz, Edward Norton, Stacy Keach and Oscar Isaac, while franchise veterans Albert Finney, Joan Allen, David Strathairn and Scott Glenn reprise their roles. -- (C) Universal

David Leitch
as The Driver

Julie R. Ysla
as Woman with the Bag

News & Interviews for The Bourne Legacy

View All The Bourne Legacy News

Critic Reviews for The Bourne Legacy

The Bourne Legacy is quieter, slower, more sobering. The conspiracy is bigger and darker than we thought.

There's enough there, in all likelihood, to make audiences hope for more, but it's not as finished or complete a work as it should have been.

Shares crucial DNA with the earlier films but is drawn from the shallower end of the gene pool.

Gilroy hasn't locked down every last task and stumbles at the end, but he keeps an awful lot spinning for an awfully long time.

The Bourne Legacy is proof that if they don't bring Matt Damon back, this franchise is going nowhere. [Full review in Spanish]

Overall, The Bourne Legacy is mostly disappointing, poorly edited and it seems have buckled underneath with the expectations from the original films, which weighed heavily on its shoulders.

All we get is two hours of talk, interrupted by the occasional violence and a painfully truncated ending that leaves the door open for The Bourne Whatever They Name The Fifth Part.

It just isn't gripping and the story mechanics don't hold up to close scrutiny.

While it may not be satisfactory, both protagonists seem to be in a good place - at least for now.

The film may get a little cloak-and-dagger extreme at points, but you know what, who cares?

Audience Reviews for The Bourne Legacy

A pathetic and useless follow-up to an excellent trilogy, making us follow another fugitive guy while Jason Bourne is only mentioned but never appears. Besides, apart from a few efficient scenes, it is mostly confusing and tedious, especially in its uninspired chase scenes.

An interesting addition to the series which runs concurrent with the last film time wise. The plot is starting to get stretched a bit thin now though, I liked the original films gritty realistic feel. Overall I think it was a bit hyped up and the ending was a bit sudden, not what I was hoping for but still a good action film.

The Bourne Legacy looks and feels like another entry in the well liked series, but is missing the interesting characters and revelations that made the trilogy a massive hit in the last decade. Jeremy Renner is a fine actor and does well in the role of Aaron Cross, but the character itself is not as interesting as Jason Bourne and Matt Damon's magnetic portrayal which pushed it over the top. It was all about uncovering past mysteries before and it was genuinely compelling and well-crafted storytelling, but this entry is perfectly content to recycle material and deliver a mediocre story that doesn't have the push of past entries. Honestly, not much happens in this film in terms of the overall plot arc and the future is up in the air on whether or not we will ever get a sequel, which makes the non-ending of this film even more anti-climactic. The supporting characters also are not as compelling as the series past. Edward Norton plays a bland "villain" in this, despite also being an excellent actor, and Rachel Weisz is mostly wasted in the damsel in distress role. David Strathairn is certainly missed. The one criticism levied towards the original trilogy was the camerawork, which was mostly shaky-cam to add intensity, but some people complained they couldn't tell what was going on. I disagreed with this and thought it added a level of visceral satisfaction to the films. Legacy pretty much does away with them. It's a much more straightforward approach, adding to the blandness. There are some good things, mostly some excellent scenery and cinematography towards the beginning and some good action sequences. It is still Bourne, after all. The film itself is decently paced and can be entertaining, but it's a second rate version of the original films.

Bourne series scripter Tony Gilroy steps into the director's chair for this sidequel that takes the ideas from the previous films, and runs with it, giving us a deeper look into the world created in the other films, but through the eyes of some new (and a few old) characters. While not physically present, Jason Bourne, and what he was a part of, play a big role here, making the film's title of 'legacy' really appropriate. Set around (and during) some of the events of The Bourne Ultimatum, this is the story of a new agent whose fate has been sealed by the events of the first three films. His name is Aaron Cross, and, because of what Bourne did, he now founds himself on the run with a fellow person also deeply involved in all of the shadowy government business. The film has all the globe-trotting thrills you'd expect from this sort of thing, but it doesn't have the same impact as the other films, and this one is easily the weakest/least interesting. That doesn't mean that it is a bad film, but it just isn't as captivating. The ideas behind it are interesting, and I liked how the film shows the fallout and consequences of the events from previous films, but these new characters in general just aren't as compelling. Renner is solid as the leading man here, but I can't say the same for Weisz, who is rather underwhelming most of the time. I think Norton did decent too, though this seems more like a sleepwalk for him than anything else. As far as the cinematography goes, Robert Elswit delivers the goods, and we get some gorgeous stuff here. The editing, especially in the action moments is also far less choppy than before, but the action scenes themselves aren't as thrilling as the earlier ones. I did like the end chase, but it went on a tad too long. The hands down best part of the film though, has to be the utterly gripping and suspenseful laboratory shooting scene. That was some intense and chilling stuff. And that's probably Gilroy's best strength here- the ability to really deliver tension and suspense. The rest feels kinda routine, though still decent. Aside from not being as compelling, the essentially non-existent ending is really frustrating, even though I would like to see more of the Cross character, oddly enough. The film is also too long, and definitely feels that way. The script is also probably a tad too convoluted for its own good. In the end, as flawed as this might be (and it sure is), I did enjoy this, even if it fails to be as strong as its predecessors. This is one of my rare times where I'll give it the slightest recommendation possible, so give it a watch.