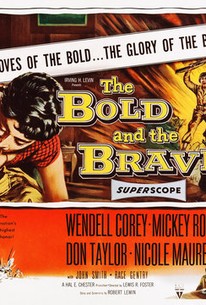 The Bold and the Brave Photos

Bold and the Brave traces the destinies of three American soldiers stationed in Italy during World War II. Wendell Corey is top-billed as an idealistic soul who doesn't believe in killing. Don Taylor portrays a religious bigot, who can't see anything in terms other than Good and Evil. The most intriguing (and entertaining) member of the trio is Mickey Rooney, an inveterate gambler who runs a floating crap game up and down the Italian front. Since Rooney frequently declares that he's building up enough money to open a fancy New York restaurant, it's a foregone conclusion that he's not going to get out of the war alive. The title song for Bold and the Brave was cowritten by Mickey Rooney and Ross Bagdasarian, the latter best known as the creator of Alvin and the Chipmunks.

Bobby Watson
as Bob
View All

Critic Reviews for The Bold and the Brave

Bouncy little Mickey Rooney, whose performances sometimes bore me to pieces, this time is likeable and convincing as a crapshooting G1 in a war story, better than most.

There are no featured reviews for The Bold and the Brave at this time.

The Bold and the Brave Quotes