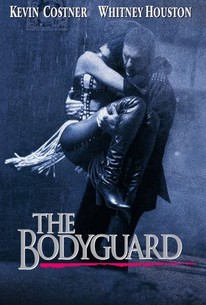 Critics Consensus: The Bodyguard is a cheesy, melodramatic potboiler with occasional moments of electricity from Whitney Houston.

Critics Consensus: The Bodyguard is a cheesy, melodramatic potboiler with occasional moments of electricity from Whitney Houston.

Critic Consensus: The Bodyguard is a cheesy, melodramatic potboiler with occasional moments of electricity from Whitney Houston.

Lawrence Kasdan originally wrote his script for The Bodyguard in the late 1960s as a vehicle for Steve McQueen; by the time it reached the screen, Kasdan's star was another movie hearthrob, Kevin Costner. When imperious musical superstar Whitney Houston begins receiving death threats, she is compelled to hire a bodyguard. Enter Costner, who immediately incurs the wrath of Houston and her entourage by imposing prison-like security measures. An ex-Secret Service agent, Costner still hasn't purged himself of his guilt feelings over his inability to protect President Reagan from would-be assassin John Hinckley (in the original concept, the agent had been guarding JFK in Dallas, but Costner was too young to make this credible; besides, he and Oliver Stone had been there before). Gradually, and inevitably, Costner and Houston fall in love. Ralph Waite is cast as Costner's father, while Robert Wuhl and Debbie Reynolds please the crowd in their cameo roles. The Bodyguard was a huge box-office success, helped along in no small part by Whitney Houston's bestselling rendition of the old Dolly Parton hit "I Will Always Love You." ~ Hal Erickson, Rovi

Victoria Bass
as Woman in Green

Critic Reviews for The Bodyguard

if you can overlook the obvious flaws--a bumpy beginning, a villain whose motive is both too obvious and hard to swallow--The Bodyguard has its flashy, shallow pleasures. There's some wit in Kasdan's script, and dread in the Oscar-ceremony climax.

The Bodyguard is an outrageous piece of saccharine kitsch -- or, at least, it might have been had the movie seemed fully awake.

A jumbled mess, with a few enjoyable moments but little continuity or flow.

Lawrence Kasdan, it seems, mulled over the first draft of his screenplay twenty years ago; it should have been left to languish in development purgatory.

Two long hours and 10 minutes after this tale begins, Rachel and Frank seem no closer than seatmates on a long bus trip.

The movie does contain a love story, but it's the kind of guarded passion that grows between two people who spend a lot of time keeping their priorities straight.

A really bad, and at times, confusing script. [Full Review in Spanish]

As a suspense film, The Bodyguard delivers a big chill. And as a love story, it erects a grand canyon between its unromantic, reluctant Romeo and its glitzy, but boring Juliet.

A suspense classic that never lets up.

There's no unironic value to this.

The premise is workable, but the movie is sabotaged by several elements, including the hot-and-cold dialogue, obvious red herrings, and a ludicrous climax centering on an assassination attempt at the Academy Awards ceremony.

Old fashioned star vehicle that makes no bones about manipulating its audience, but which does so with plenty of theatrical gusto.

Audience Reviews for The Bodyguard

A great film. Costner makes an excellent bodyguard and Houston's singing voice just blows you away everytime. The soundtrack is just as good as the film.

Kevin Costner stars as an ex Secret Service, turned Bodyguard who is billed as the best there is. Hired by Rachel Marron, a famous singer (played by Whitney Houston who is surprisingly good) after a series of problems from an obsessed fan. This film sounds like (and at times plays like) a daytime TV movie. However, there is something about the 1990's Kevin Costner that transforms this film into one of the best films of its day. We are made to gasp as Kevin Costner swoops in and save the head strong singer time and time again and look on as the pair inevitably fall for each other. The only downside of this film is the somewhat unexplained jealousy of the older sister and the motives behind the assasination attempts on the famouse Rachel Marron. "The people who hire me, they don't have to be convinced to save their own lives. "

This movie is in my opinion one of the greatest love stories of all time. The soundtrack and Kevin Costner and Whitney Houston make this movie one of my all-time favorite movies! :) Just great :)

A terrible movie with a successful soundtrack.