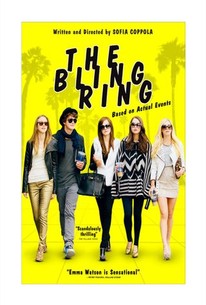 Critics Consensus: While it's certainly timely and beautifully filmed, The Bling Ring suffers from director Sofia Coppola's failure to delve beneath the surface of its shallow protagonists' real-life crimes.

Critics Consensus: While it's certainly timely and beautifully filmed, The Bling Ring suffers from director Sofia Coppola's failure to delve beneath the surface of its shallow protagonists' real-life crimes.

Critic Consensus: While it's certainly timely and beautifully filmed, The Bling Ring suffers from director Sofia Coppola's failure to delve beneath the surface of its shallow protagonists' real-life crimes.

In THE BLING RING, Oscar Winning filmmaker Sofia Coppola takes us inside the world of these teens, where their youthful naivete and excitement is amplified by today's culture of celebrity and luxury brand obsession. The members of the Bling Ring introduce us to temptations that any teenager would find hard to resist. And what starts out as youthful fun spins out of control, revealing a sobering view of our modern culture. (c) A24

Michael Yo
as Male E-Interviewer

Christopher Blauvelt
as Cinematographer
View All

News & Interviews for The Bling Ring

View All The Bling Ring News

Critic Reviews for The Bling Ring

It's smart and droll.

The sense of detachment that is a signature of Sofia Coppola's work -- the coolly distant, stylishly dreamlike way she regards her characters -- works to her detriment in The Bling Ring.

Director Sofia Coppola delivers a wily critique of celebrity culture in The Bling Ring as she dresses up the true story of Los Angeles teenagers robbing their Hollywood idols' homes.

Soon reveals itself to be grimly repetitious, simply showing these kids stealing, then partying, taking pictures of themselves and putting them on Facebook, over and over again, until they are caught.

A film about teenagers, crime, celebrity, LA, the internet and the cinema. These still waters run very deep indeed.

The film confirms that vanity is a delicate, difficult target. Miss it, and you and your artistry seem as vain and misdirected as your material.

Through her creative eye, Coppola is able to emphasise the 'fakeness' of the characters whose vapidness disappears when they commit their crimes, while capturing their unpolished refinement.

Playing like the slow, dull sister of Spring Breakers, The Bling Ring exchanges neon decadence and teen sinning for vacant crimes of boredom. The take home message here isn't an indictment of modern celebu-worship so much as it is "eh, whatever."

It's a fun film and Coppola leaves the inexplicable up to us to ponder.

A film that is as cold and callous as its subject matter. It's a calculated risk by Coppola, but one that ultimately works. I liked The Bling Ring, even if I felt dirty afterward.

In her attempts to poke fun at the cult of celebrity, [Coppola]'s perhaps forgotten to allow us a character to truly identify with.

The Bling Ring is basically the same thing over and over.

Audience Reviews for The Bling Ring

Was this a very dramatic retelling of the Hollywood Hills burglaries by accomplished director Sofia Coppola? No. Was it a "Spring Breakers" wannabe that reveled in debasing its main characters? Oh yes. That's what puts me off of Coppola's latest venture, starring Emma Watson, Taissa Farmiga, and newcomer Israel Broussard. Coppola obviously detests her characters, and throughout their depiction obviously judges them for their decisions. She doesn't flesh them realistically, and instead gives us flat, uneven characters whose only ambition seems to be partying, drinking, and being juvenile delinquents. Because the characters are flat, the story barely goes anywhere. The entire film is them roving around in celebrities' houses, which isn't entertaining. Marc has some legitimate backstory, but otherwise we're left with bubble headed teenagers trying to be gangsta, and failing miserably. I'd rather re-watch "Kids" than sit through teenaged tripe like this again.

Based on actual events, The Bling Ring follows a clique of celeb and fashion obsessed kds of privilege who indulge in their love of both by burglarizing the homes of various celebrities, all the while ,not exactly keeping a low profile. Like a number of Sofia Coppola's films, while adults do have a presence, this is a film dominated by the young. The core group of vapid, naive, yet not totally unlikeable youths are played by Emma Watson, Taissa Farmiga, Katie Chang, Claire Pfister, and newcomer Israel Broussard, who, like the men from previous Coppola efforts, delivers a very strong turn in a film filled with rock solid work. That's something I've grown to love about Coppola, how, no matter if they're a newbie or a veteran, she always manages to get her actors to deliver arguably some of, if not their absolute best work. This film is a pretty timely one. Not that the events that it depicts happened all that long ago, but in this status and celebrity obsessed culture we live in, relevance is everything, and it's crucial to be up on all that latest news and trends. In this regard, the film is both a crime caper, as well as a cheeky, light satire. I mean, some of it is pointed, but it's done in a way that I think will cause some people to not totally get it. The film easily fits into Coppola's oeuvre and aesthetics, but I think that maybe at times it could have been more blunt and forceful with the more biting elements and moments. Kudos though, for getting permission to film in the actual celebrities's homes and recreate the crimes. I especially enjoyed robbery scene done in a single take from a distance. As mentioned, the cast are awesome. Broussard is great, Emma Watson is a real scene stealer, and her American accent is delightful. I'd also love to see more of Chang and Farmiga. And, while I'm growing a bit weary of her, I enjoyed Leslie Mann as the mother of some of these girls, and she nails the modern day new-age philosophy of parenting "these type" of girls to a T. All in all this is a glossy and fun film that will satisfy, but doesn't leave a strong legacy like the kind the characters aspie to have, Regardless, I dug it and think you should check it out.

There was no real depth to this film. Of course, we are dealing with superficial characters is obviously not promising but I guess I hoped it would be more substantial in terms of content. Watson's American accent is understandably uneven.

It's easy to understand why "The Bling Ring" is such a divisive film. Character development and plot structure takes a backseat to a portrait of a very specific type of people. However, that depiction, while not always perfect (the dialogue sounds exactly like how an adult would think teenagers talk), the film is still beautiful and fascinating enough to work, thanks to Coppola's ability to give a palpable sense of atmosphere and beauty to even the most vapid of contexts.