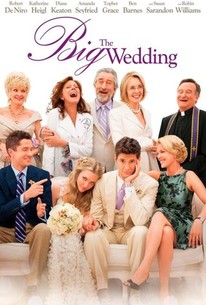 Critics Consensus: The Big Wedding's all-star cast is stranded in a contrived, strained plot that features broad stabs at humor but few laughs.

Critics Consensus: The Big Wedding's all-star cast is stranded in a contrived, strained plot that features broad stabs at humor but few laughs.

Critic Consensus: The Big Wedding's all-star cast is stranded in a contrived, strained plot that features broad stabs at humor but few laughs.

With an all-star cast led by Robert De Niro, Katherine Heigl, Diane Keaton, Amanda Seyfried, Topher Grace, with Susan Sarandon and Robin Williams, THE BIG WEDDING is an uproarious romantic comedy about a charmingly modern family trying to survive a weekend wedding celebration that has the potential to become a full blown family fiasco. To the amusement of their adult children and friends, long divorced couple Don and Ellie Griffin (De Niro and Keaton) are once again forced to play the happy couple for the sake of their adopted son's wedding after his ultra conservative biological mother unexpectedly decides to fly halfway across the world to attend. With all of the wedding guests looking on, the Griffins are hilariously forced to confront their past, present and future - and hopefully avoid killing each other in the process. Screenplay by Justin Zackham. Directed by Justin Zackham. (c) Lionsgate

News & Interviews for The Big Wedding

View All The Big Wedding News

Critic Reviews for The Big Wedding

It's not the sheer predictability of the ensuing frolics that's hardest to take, or even the dismal attempts at humour ... but the sheer misery of watching actors you once respected demean themselves in such utterly worthless fodder.

Weddings can often be occasions of trauma, as well as joy, and so it proves with this ensemble comedy. Well - minus the joy, that is.

The film is only endurable to those who can blank out the memory of what [De Niro] did when he was young and what he once meant to us.

The beigest film ever made.

A movie can tread familiar waters as long as it attempts to do so in a different way, which this doesn't.

The Big Wedding is the kind of movie that gives boomers a bad name.

The Big Wedding becomes rather worn and flat. Still, with such a prestigious cast, it's hard to truly hate the film.

If the whole set-up wasn't so apologetically dire, you could call its politics offensive.

Trivial, meandering and mean-spirited, The Big Wedding ironically serves as an instant funeral for the camera-mugging cohorts saddled in this incoherent and mindless marriage-in-the-making mishap.

An all-star cast fall victim to a shallow, tasteless script.

Audience Reviews for The Big Wedding

** Some movies have really good casts and they just don't work out. "Big Wedding" is one of those movies. Robert Di Nero, Diane Keaton, Katherine Heigl, Topher Grace, Amanda Seyfried, Susan Sarandan round out the cast. But even with all that star power, this is a very uneven, unfunny romantic comedy. It's basically about a dysfunctional family coming together for a wedding, and all their problems come to a head. Women will probably enjoy it more than the guys(even though Emily passed out and didn't care for it all). Worth a watch? Maybe a one time on Netflix. But not really worth any money.

It's never too late to start acting like a family. Good movie! The one line that "The Big Wedding" straddles well is that between comedy and drama. The film is effective when it moves from funny jokes to touching family honesty and back to some more funny jokes. The story lines are very predictable, and sometimes the jokes are too simple and too wrong, but it tries to add in the right amount of drama, and ultimately, it should be entertaining to fans of the genre. Don and Ellie were once married and have two children, Lyla and Jared. They adopted a boy from Colombia, Alejandro. Eventually they divorce, Ellie moves away and Don hooks up with Bebe, Ellie's best friend. When Alejandro is about to get married, he informs Don And Ellie that he never told his natural mother who is so traditional that they got divorced. And she is coming for the wedding so he asks them if they can pretend to still be married. Don and Ellie reluctantly agree to it and Bebe moves out who is also upset that Don for some reason doesn't want to commit.

Pretty lame. Good cast is pretty much wasted. Katherine Heigl is quite brittle and you can guess her little secret early on. Amanda Seyfried is underused. Diane Keaton is virtually the same mother character she always plays. I hated Robert DeNiro's character - was a sleazy old creep. Susan Sarandan, not at her most likeable either. I also didn't like the stone-faced biological mother - very cliched until the very end. Plot is wafer thin. Can't even be bothered repeating it, and it seemed most of the "adult" cast were, or had been, involved in some shocking sexual thing. The younger cast are pretty tame by comparison. The bit with the "moms" at the end was a step too far for disbelief. The whole thing had me rolling my eyes, and Robin Williams as some marriage advising vicar thing again - didn't he already play that role in that godawful Mandy Moore movie from a few years back? It's not much better here. There are a few tame laughs, and it is good to see Topher Grace onscreen, but most of these actors have made far better movies in this genre. 27 dresses, Because I said so, Win a date with Tad Hamilton, Mean girls. Rent one of those instead!

There are so many things wrong with this overblown, idiotic pile of feces that it's actually overwhelming me to put my thoughts in order to review it. Well, first of all, these giant wastes of ensemble comedy have been prevalent lately and they must end. The characters always end up ill defined, baseless, crude, and unfunny. That turns out to be a true statement of the cast assembled for this schlock, and what's so sad about it is that some of the biggest and most beloved names are attached to this film. I can critique every one of their performances negatively: De Niro is a pervert and a misogynist plain and simple, Keaton is playing yet another drippy old mom, Heigl is yet another disenchanted neurotic, and Williams plays another funny priest, because he just did so well in his previous role, right?! The premise is that a divorced couple pretend to be together to please their son's biological mother during his wedding, which in itself is simply too stupid to bear, and even if it was a smart start for a film, it is not utilized as a plot device as well as it could have been. Now, I definitely love mind numbing romantic comedic films, but this film is so far off from what is appropriate for a film to be. The humor is all adult, granting this film an R-rating, but none of said humor is anywhere near funny or smart. De Niro is in a role where he cheats, lies, and makes horrific comments and jokes that are women hating, nausea inducing, and pathetic. Every joke in this film revolves around sex, and really, aren't jokes. It's more shock humor than anything, but there's nothing shocking about a horrible older man who uses women and then makes fun of them for sport. Everyone in this film should truly hate one another, but they keep finding each other's antics to be eccentric or quaint, which is simply scary, not endearing. Only the siblings, who make fun of each other, have any scenes where familiar ties are displayed, but they slip right back into acidic behaviors. That and there's a large block of background information that gets schlepped onto us in the last several scenes of the film, and with prejudice, for no apparent reason other than to add more shock, and what do you know, it doesn't. Seriously, even for a film that at its core only wants to briefly entertain can't even do that right.