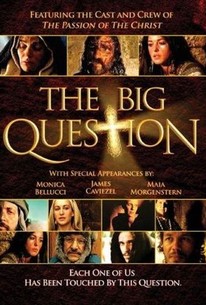 A pair of filmmakers explore the issues of faith in the 21st century during the shooting of a controversial retelling of the life of Jesus Christ in this documentary. Francesco Cabras and Alberto Molinari are documentarians who also work as actors, and the two men had small roles in Mel Gibson's film The Passion of the Christ. During the course of filming in Southern Italy, Cabras and Molinari brought a small camera crew to the set and conducted interviews with members of the cast and crew (including Gibson, Jim Caviezel, and Monica Bellucci) in which they asked a few simple yet revealing questions about faith. As actors, historical advisors, local extras, grips, and others ponder questions such as "Who is God to you?," "What happens after life?," and "If you were born on the other side of the world, would you have the same religion?," the subjects attempt to explain their own perspectives on faith and their personal relationship with the Lord as well as the circumstances that led them to their current beliefs. The Big Question received its North American premier at the 2004 AFI Film Festival.

Critic Reviews for The Big Question

It's a pity they didn't release this film paired with The Passion. It plays better than any 'Why I made this movie' documentary you've ever seen.

An annoying documentary by Francesco Cabras and Alberto Molinari.

What might have made for an interesting short film lacks the weight to sustain its feature (albeit, brief) length.

An exploration of personal religious belief in which members of the cast and crew of [The Passion of the Christ], as well as people from the southern Italian villages where it was made, are asked to ponder the question, 'What is God to you?'

Cabras and Molinari squander a golden opportunity to produce a spiritually oriented variation on the lightweight making-of genre.

While offering no tidy answers, The Big Question does illustrate the astounding variety of human experience and belief. Perhaps we can find some spiritual satisfaction in that.

A collage of highly personal reflections that range from the goofy to the surprisingly affecting.

Evenhanded as it may generally be, The Big Question can't avoid having the opinions of Mel Gibson.

There are no featured reviews for The Big Question at this time.