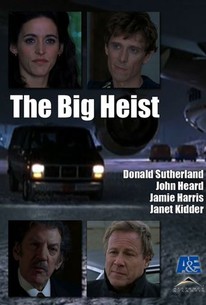 Based on a book by Ernest Volkman and John Cummings, the made-for-cable The Big Heist endeavors to put a human face on the events surrounding a real-life robbery which occurred at JFK International Airport's Lufthansa terminal in 1978. Donald Sutherland stars as Jimmy "the Gent" Burke, a low-echelon Mafia gangster who yearns to make at least one big score before he dies. To this end, he gathers together a motley group of henchmen and masterminds the theft of eight million dollars right from under the noses of the JFK authorities. Amazingly, the robbery goes off without a hitch, and Jimmy exults in the possibility that he has at last attained the Criminal Hall of Fame. But things quickly begin to unravel when one of Jimmy's cohorts is whacked by the Mafia higher-ups because of an unrelated indiscretion. Before long, Jimmy's entire gang has been decimated, and it looks as if his own son will be next on the hit list. As a result, Jimmy is actually relieved when diligent detective Richard Woods (John Heard) finally catches up with him...but the "hero" is still not out of the woods by any stretch of the imagination. The Big Heist was broadcast by the A&E cable network on June 10, 2001. ~ Hal Erickson, Rovi

Scott Wickware
as Al the Guard

Critic Reviews for The Big Heist

Far from the worst of the many films not worth watching; see this one for Sutherland.

There are no featured reviews for The Big Heist at this time.