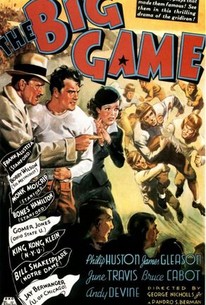 Future best-selling novelist Irwin Shaw made his screenwriting bow with the modest RKO Radio sports drama The Big Game. The story revolves around the efforts by a group of crooked gamblers to fix the outcomes of college football games. When star quarterback Clark (Philip Huston) refuses to be bribed, the villains kidnap him on the eve of the titular Big Game. Clark is rescued by his burly teammates just in the nick of time, but the film's not over yet: there's a riot on the football field during the final scenes, reportedly inspired by a real-life incident during a 1935 NYU-Fordham game. Adding to the enjoyment of The Big Game is the presence of several genuine members of the 1936 All-American football squad: The University of Chicago's Jay Berwanger, Notre Dame's William Shakespeare, Southern Methodist's Bobby Wilson, NYU's Irwin "King Kong" Klein, Ohio State's Gomer Jones, and Stanford's Robert "Bones" Hamilton, Monk Moscrip and Frank Alustiza. ~ Hal Erickson, Rovi

Critic Reviews for The Big Game

There are no critic reviews yet for The Big Game. Keep checking Rotten Tomatoes for updates!

There are no featured reviews for The Big Game at this time.