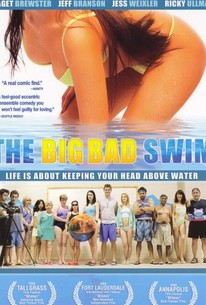 Ishai Setton's comedy drama The Big Bad Swim concerns the people who sign up to attend a beginner adult swim class. Some of the people involved in the class include Amy (Paget Brewster), whose marriage is on the rocks; Jordan (Jess Weixler), a stripper; and the teacher Noah (Jeff Branson), who eventually experiences romantic sparks with Amy. Another subplot involves a documentary film being made about Jordan. The Big Bad Swim had its world premiere at the 2006 Tribeca Film Festival.

Regardless of all the times I've desired more fresh ideas in a movie, The Big Bad Swim reminded me that sometimes characters don't require novelty as long as they feel genuine.

there's a little too much time paddling around in the pool when we ought to be getting to know our quiet heroes.

Don't be thrown by the cover on this film...it isn't a softcore, national Lampoon film. This movie was quite enjoyable and was a fantastic character study. Several apparently different personalities all bound together by one common link: they never learned to swim and they all are taking swimming lessons from the same man. This puts a large group of very normal people with normal problems together when they probably never would have met in the first place. Great set up. Great character development. Also, some interesting character growth. The problem lies in the pacing. We move at such a snail's pace that it is hard to keep on. I realize that this is not a thriller or a big budget CGI laden film. This film is solely dependent on the script, the characters, and how well they are portrayed and they are portrayed very well, but it just gets boring. I have been a huge fan of Paget Brewster since "Huff." The whole cast was great really. A lot of credit for the film's lovability goes to the perfect casting of Brewster and Weixler. "Sometimes characters don't require novelty as long as they feel genuine" and these characters felt wholly genuine, but the pacing keeps it out of the realm of "utterly fantastic." This is a great example of an indie film that sacrificed nothing on the altar of integrity, but lost some of its audience to being too real and nary a hint of escapism.

A lovely film about a group of people who enroll in an adult swim class at the local recreation center. Some are afraid of the water, others have never before taken the opportunity to learn. Each one must face the issues in their lives and the swim class becomes a metaphor for the progress that each one makes on their personal journey. The main story follows Noah (Jeff Branson), the swim class teacher and his bout with depression; Jordan (Jess Weixler), a girl who works part time in a casino and part time as an exotic dancer; Amy (Paget Brewster), a high school math teacher whose husband left her for another teacher; and a young man (I never did catch his name) who seems to live at the casino where Jordan works and who meets and beds Amy. Other stories that are woven in and around the main thread deal with friendships and overcoming the obstacles that would prevent these people from achieving their goals. Solid pacing and characters with real depth that we come to care about make this a quite entertaining slice of life.