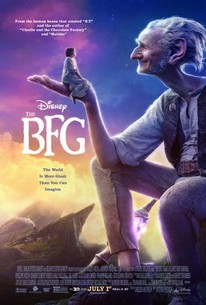 This film tells the tale of a young girl, the Queen of England and a benevolent giant known as the BFG, who set out on an adventure to capture the evil, man-eating giants who have been invading the human world.

Penelope Wilton
as The Queen

News & Interviews for The BFG

View All The BFG News

Critic Reviews for The BFG

Visually, though, the film can be gorgeous.

This family-friendly blockbuster is not a Pixar pick-me-up, or a wacky Ice Age odyssey designed to send the little ones screaming excitedly through the foyer, hopped up on irony and wisecracks and heading directly for the nearest toy store.

Rylance gives a rueful rendition of the friendly giant.

In recent years, Spielberg has become a hit-and-miss filmmaker and this is closer to a "miss" than a "hit."

Rylance has again brought something transformational to a Spielberg film. He gives the kind of performance you can't look away from, even with all the big-budget delights.

As a character, the BFG is a wondrous creation, and Rylance does a magnificent job bringing him to life.

While The BFG is perhaps a lesser Spielberg film, his lesser efforts are better than the best efforts of many others. This is a film of genuine kindness...

A vivid storytelling piece with vision and fantasy.

The BFG should have been more OMG, and maybe a little more LOL but it's still more than A-OK.

There are treasures to be unearthed in the loving and poignant last cinematic words of Mathison's adaptation.

The fantasy world of the "dream tree" is magical though and gives The BFG a sense of whimsy and playfulness it desperately needs. Unfortunately, those moments are too few to make a significant difference to the overall story.

Audience Reviews for The BFG

It's a cute family fun drama but doesn't have the charm as the classic children's book!

The visual effects using performance capture are great, but there is no magic, beauty or even genuine emotion in this lifeless, poorly-structured and tedious movie that almost put me to sleep and certainly ranks now as one of the worst of Spielberg's entire career.

With the exception of The Adventures of Tintin in 2011, Steven Spielberg has been getting all serious on us over the last five years. He's predominantly dealt with war, politics and espionage in War Horse, Lincoln and Bridge of Spies respectively. However, he now reunites with his E.T. screenwriter Melissa Mathison to bring a much loved children's novel to the big screen in The BFG - a film which brings reminders of his fantastical adventures and his ability to deliver family friendly entertainment. One evening in her orphanage young Sophie (Ruby Barnhill) encounters something she never knew existed - a 24 foot tall giant. To protect his anonymity, the giant decides to take her back to Giant Country where an initially apprehensive Sophie realises that the Big Friendly Giant (Mark Rylance) is actually very gentle and well mannered. However, her arrival in Giant Country attracts the attention of bigger, more bloodthirsty giants that have been known to eat children, leaving Sophie and the BFG formulating a plan to get rid of them for good. Spielberg always seemed like the perfect choice to adapt Roald Dahl's classic children's novel and it doesn't take long to to realise the story is in safe hands with him. From the opening sequence alone on how the giant manages to hide while prowling the city at night is one of the film's true highlights and while still putting his own stamp on the proceedings, Spielberg shows that he has a keen eye and ear for the essence of the book. The BFG's lexicon of gibberish language is a delight and the stunning visuals really bring the character to life. As is often the case with Spielberg's fantasies, it's quite a spectacle. In a combination of CGI, motion capture and exemplary acting abilities Mark Rylance delivers a solid performance as the amiable giant. Despite his imposing presence, Rylance captures the emotion and sensitivity required for the role without ever overplaying it. Put simply, he's an absolute joy to watch. And the same goes for Jermaine Clement as the Fleshlumpeater - The BFG's bloodthirsty nemesis. The BFG is not without it's problems, though. For a start, it has pacing issues. It's overlong and within it's two hour running time has several periodic lulls which can cause your concentration to waver. Younger viewers, in particular, may find themselves distracted. That said, the final third taps more into a child's sense of humour with the odd fart joke here and there and Spielberg can't resist being overly sentimental on occasion. As much as this will capture the enthusiasm for kids, it will probably ostracise some adults and it's this unbalanced approach that becomes a slight sticking point. Overall, though, these are small gripes as there's still plenty to admire from Spielberg's efforts. It's escapist entertainment with a genuine heart and playfulness and when it's called upon to be exciting, it has some excellent set-pieces that Spielberg is more than able to handle. The late Melissa Mathison's screenplay has a tendency to wander and the film could have been tighter but the visual effects are astonishing and Rylance and Clement really deliver the goods in the acting stakes. A magical childhood classic that has finally been given the big screen treatment that it's deserved for years. Mark Walker