The Beginning of a Great Revival2011 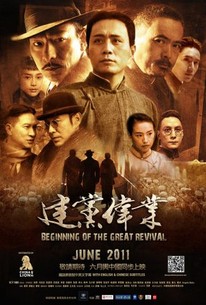 The Beginning of a Great Revival Photos

Beginning of the Great Revival, known as The Founding of a Party in China and a companion piece to 2009's blockbuster The Founding of a Republic, details the historic events surrounding what is referred to as the Chinese Revolution, the period from 1911 to 1921, when Sun Yat-sen overthrew the Qing Dynasty and planted the roots of what has become today's Chinese Communist government. The story shows the beginnings of the country's most influential first-generation leaders, including Mao Zedong, Chiang Kai-shek and Zhou Enlai. Just as The Founding of a Republic did, the film, co-directed by Jianxin Huang and Sanping Han, features a cast of China's biggest box office names such as Liu Ye, Chang Chen, Chen Kun, Andy Lau, Daniel Wu and John Woo. -- (C) Official Site

Critic Reviews for The Beginning of a Great Revival

"Revival" is a proud statement by an ascendant society. But it demonstrates that mainstream Chinese cinema can be as guilty of self-indulgent overstatement as anything out of the West.

The highly-charged crowd scenes in which dissidents clash with authorities are staged with visual flair, conveying an exhilarating sense of self-empowerment which is the essence of revolution.

"Great Revival" is in many ways the very definition of propaganda - it even ends with an image of a waving flag - but "Revival" is too harmlessly flabby to be taken quite that seriously.

Perhaps the translation is at fault here, but why does the dialogue consistently do so little to flesh out the characters?

Epic with production values and a terrific ensemble cast, but often bland and emotionally hollow.

The technical accomplishment and narrative scope of this propagandistic telling of the origins of the Chinese Communist Party stand in contrast to plotting that is stodgy and characterizations that are thin and functionally sketched.

A muddled would-be epic of the Chinese Communist Party's founding, this all-star propaganda pageant plays like an incoherent lesson plan.

Audience Reviews for The Beginning of a Great Revival

Boasting quite the big name cast in East Asian cinema is about the only thing great about "The Beginning of a Great Revival". Even though the content and message is blatant propaganda, this film will be of interest to huge history buffs that know their stuff. It quickly moves through historic events leading up to the founding of the Chinese Communist party, flashing names of important figures as they come and go on-screen, so if you have no background on the topic, it will be confusing.

The Beginning of a Great Revival Quotes