The Beatles: Eight Days a Week - The Touring Years2016 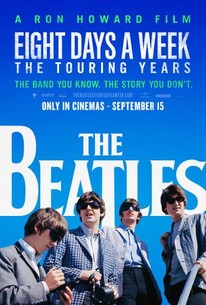 Critics Consensus: We love them, yeah, yeah, yeah -- and with archival footage like that, you know The Beatles: Eight Days a Week -- The Touring Years can't be bad.

Critics Consensus: We love them, yeah, yeah, yeah -- and with archival footage like that, you know The Beatles: Eight Days a Week -- The Touring Years can't be bad.

Critic Consensus: We love them, yeah, yeah, yeah -- and with archival footage like that, you know The Beatles: Eight Days a Week -- The Touring Years can't be bad.

The Beatles: Eight Days a Week - The Touring Years Photos

We all know the moment. February 9th, 1964, 8:12pm EST - after a brief commercial break, four young men from Liverpool step onto the Ed Sullivan stage, changing culture forever. Seventy-three million people watched The Beatles perform that night, the largest audience in television history. It was an event that united a nation and signaled the birth of youth culture as we know it today. But while this single performance introduced The Beatles to America, what the band did next would introduce them to the entire world, permanently transforming the music industry and forever engraining them into the fabric of popular culture... They went on tour. By the time the band quit touring in August of 1966, they had performed 166 concerts in 15 countries and 90 cities around the world. The cultural phenomenon their touring helped create, known as "Beatlemania," was something the world had never seen before and, arguably, hasn't since. It was the first time much of the world felt truly unified - bound by aspiration and attitude, rather than divided by race, class, religion or nationality. THE BEATLES LIVE FILM PROJECT will tell the story of the band's exceptional touring years - from the perspectives of the band, its world, the fans, and their world. It will examine the impact of those years on each of The Beatles - the toll that touring took on their relationships and the effect it had on their musical evolution, as well as the colossal boost the tours gave to their lifestyle and fame. But while the band created the spark, it was young people around the world who created the firestorm. The film will also explore the incomparable electricity between performer and audience that turned the music into a movement - a common experience into something sublime.

News & Interviews for The Beatles: Eight Days a Week - The Touring Years

View All The Beatles: Eight Days a Week - The Touring Years News

Critic Reviews for The Beatles: Eight Days a Week - The Touring Years

The songs are still great. The foursome's waggish chemistry is still a wonder. But there's a lot of old ground, even old grind.

The material is uncontroversial to say the least, but hugely enjoyable with some remastered live performances that were previously drowned out by screaming girl fans.

[Howard seems] as if he were intent on making a film for anyone who tuned in to The Ed Sullivan Show in 1964, fell in love with the four adorable mop tops and regrets all the long-haired plonking about with sitars that came later.

For those of us who can remember, it's a deliriously evocative nostalgia trip, as well as a timely reminder of more spontaneous times.

The Beatles now belong to an honored past, stuck there like an obelisk, and yet here they are, alive-busting out all over, time and time again. Yeah, yeah, yeah.

Eight Days A Week confirms that every young group of miscreants who have picked up guitars and drums in the last fifty years have been playing in The Beatles sandbox.

'Eight Days a Week' draws people's attention by the amount of recordings, about their years of shows and tours, that has been conveniently restored and shine as never before in an admirable and pure editing work. [Full Review in Spanish]

In short, two hours of ecstasy for the fans and happiness for the rest of the audience. [Full review in Spanish]

This doc isn't pretending to be anything but hagiographic, but despite its obvious fandom, it does a great job of reminding us just how ground breaking and popular the Beatles really were.

This film, like The Beatles, arrives and leaves in a rush, but it does leave one thing behind: unforgettable music.

Like most documentaries Howard has made it's fine, if rather unnecessary.

Audience Reviews for The Beatles: Eight Days a Week - The Touring Years

When you have the resources of Ron Howard and the producers working on this doc you can insert interviews with famous Beatles fans and access astounding archival footage from news sources, concerts, in depth interviews with John and George before they died, and more candid material. Focusing on the BUSY touring years from 1963 to '66 when the boys from Liverpool were getting along, this film is loaded with their great music and reveals their personalities, which those of us who didn't live during that time probably only have a vague understanding of. The digital remastering of the songs is stellar and the taped concert footage is crisp, clear, and well synched. Their cheeky jokes with the press put a smile on my face and I learned that the Fab Four refused to perform at Southern stadiums and concert venues that had segregated seating. They forced change through their popularity here in America by only agreeing to give a concert if blacks and whites in the audience were free to sit wherever they chose. Like doing the work of eight days in a seven day week this documentary packs so many details about a short three year period into its two hour and seventeen minute runtime. I recommend you watch it on Hulu.

It is a delight to witness now all that Beatlemania hysteria and the members' cheeky sense of humor in a lot of priceless archive footage combined with welcome interviews, but this nice doc is also a bit too unpretentious and doesn't offer much new insight about the band and their touring years.

The Beatles: Eight Days a Week - The Touring Years Quotes