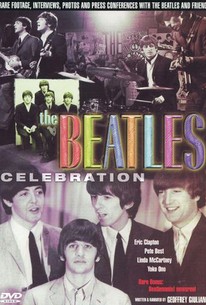 The Beatles continue to fascinate fans around the world as both a force in popular music and as a cultural phenomenon. This documentary takes a look at the career and lasting impact of Liverpool's Fab Four, bringing together photos and newsreel footage of the band at the height of their fame alongside interviews of several of their friends and associates, including Eric Clapton and Pete Best. This home video release also includes Beatlemania!, a documentary capturing the excitement of the group's return to England following their triumphant first visit to the United States in 1964.

Critic Reviews for The Beatles Celebration

There are no critic reviews yet for The Beatles Celebration. Keep checking Rotten Tomatoes for updates!

There are no featured reviews for The Beatles Celebration at this time.