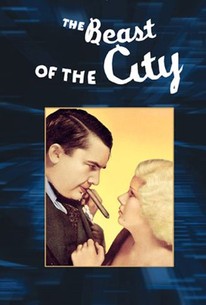 The Beast of the City Photos

A reluctantly appointed police chief in a crime-riddled city takes his job seriously and works hard to clean the streets of gangsters and to shape up his own corrupt department in this brutal, gritty film noir. Jean Harlow plays a luminescent but ill-fated gun moll.

Emmett Corrigan
as Chief of Police

Charles Sullivan
as Cop in Hall

Critic Reviews for The Beast of the City

Audience Reviews for The Beast of the City

This is a film that is for the most part mundane, tedious, and pretentious, and the only reason to watch it is to see the Jean Harlow, who is anything but those things. Walter Huston plays a police officer who is Ivory Soap pure, and who vows to clean up the city after he's promoted to chief of police. Unfortunately, a major problem with the film is there is no effective counterbalance to his role. There are 'bad guys' of course, and a few requisite chase and shootout scenes, but their presence is tepid, and there certainly is no 'beast of the city' that the title would suggest. Harlow, on the other hand, is sensational in the roll of the gangsters' moll who seduces the brother of Huston's character, who is also a cop. The scenes of her reclining back on a chaise lounge, and later swaying her body in an eastern style dance are absolutely electric. In a prelude to 'The Red-Headed Woman' which would appear later in the same year, when he grabs her by the arm and says "You don't like to be hurt, do ya?", she slowly drawls, "Oh I don't know ... it's kinda fun sometimes if it's done in the right spirit." Unfortunately, that's just about it. There's police procedure, we see Huston at home, we see him lecturing fellow officers (zzzz), and we have a typical courtroom trial near the end. Oh, if you're a Mickey Rooney fan, you may like to see him in a small part at age 11; that was somewhat cute. I won't spoil the ending but have to say it's horrible, not just because of what happens, but because of how illogical and inconsistent it is. It's also highly melodramatic, and a bookend to the beginning of the film, which has a quote from President Herbert Hoover extolling the virtues of the police and their need for better support. If you think about the actions of the police in the film however, you may find yourself a little puzzled. It's just a bad movie with one bright spot, Harlow.

Overblown antique that would be forgotten except for fans of Huston were it not for the presence of Jean Harlow in the cast. In her last supporting role before Red Headed Woman moved her to the top of the MGM pecking order she is cheap, brassy and sexual in a way that would disappear once the Hays Code went into effect in a few years. As for the rest of the film, it has pieces of dialogue that are wildly inappropriate in both racial and feminist context but were standard at the time. Huston's performance is variable, mostly good but with some ham-fisted touches but he is subtlety itself compared to Tully Marshall as the defense attorney who is so florid during one of his speeches it's impossible to keep a straight face. The climax is another piece of over the top absurdity but if you're a Harlow fan the film is worth watching.

The Beast of the City Quotes