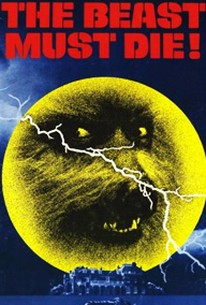 The Beast Must Die Photos

In this little horror film, a wealthy sportsman (Calvin Lockhart) invites a house full of guests to a big-game hunt that he's devised. He's sure that one of the guests is a werewolf, and he intends to stalk it, find it, and kill it. As a film viewer, you are alerted at the outset that a mystery awaits and that clues will be unveiled that can point to the identity of the werewolf. In fact, near the conclusion, the film has inserted a 30-second interlude during which you must decide, once and for all, who the hunted beast is. This film is based upon a story by James Blish titled There Shall Be No Darkness.

Critic Reviews for The Beast Must Die

The Beast Must Die is worth a look, as long as you enjoy unintentionally campy kitsch from the swinging 70s and werewolf myths.

This B-movie werewolf tale from British horror studio Amicus was a blatant attempt to compete with their equally low-budget competitor AIP studios.

Audience Reviews for The Beast Must Die

How can you not love a film that starts off announcing that towards the end there will be a special 'Werewolf minute' for you to guess the identity of the killer and then launches into the film with a full-on 'Shaft'-like soundtrack? These two elements, along with a Lockhart as an entrepeneur/hunter that has invited his guests to a secluded mansion in order to work out which is the werewolf, make this film a very different entity than most British horror at this time. Unfortunately the film-makers run out of ideas pretty quickly and my wife wasn't the only one to notice that the numerous chase sequences seem to go on forever without adding anything to the story. In the end I didn't guess the proper identity of the werewolf (or should that be 'very large dog' as the beast hardly looks threatening) but I still enjoyed this little oddity.

Oh Yeah, absolute Cushing classic. And the beasty is great too.

The Beast Must Die Quotes