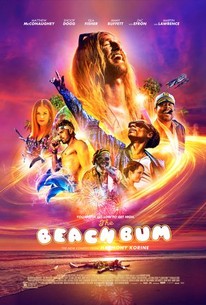 Critics Consensus: The role of a lifetime for Matthew McConaughey, The Beach Bum is set apart by Harmony Korine's distinctive style, but that isn't always enough to offset the unfocused story.

Critics Consensus: The role of a lifetime for Matthew McConaughey, The Beach Bum is set apart by Harmony Korine's distinctive style, but that isn't always enough to offset the unfocused story.

Critic Consensus: The role of a lifetime for Matthew McConaughey, The Beach Bum is set apart by Harmony Korine's distinctive style, but that isn't always enough to offset the unfocused story.

News & Interviews for The Beach Bum

Weekend Box Office Results: Dumbo Fails to Soar in its Opening Weekend
Dumbo Is Visually Impressive but Falls a Little Flat
Our 9 Most Anticipated Movies of the South by Southwest Film Festival

View All The Beach Bum News

Critic Reviews for The Beach Bum

It's as if, like the rest of the cast in this riotous non-event, [McConaughey's] having so much fun making the film that he simply doesn't care. Good for him.

Korine achieves a Zen state of unfunny with this pointless non-comedy...

It feels especially singular - as dizzying, baffling and heartfelt as something from one of our last scuzzy enfants-terribles could ever be.

What an absolute trip.

You'll need a lot of patience - or weed - to stick with Harmony Korine's paper-thin, larky portrait of a literary bum in crisis.

The Beach Bum is hilarious, quirky and the yin to the nihilistic yang of Spring Breakers.

I can't fathom a world that "The Beach Bum" exists where it wasn't some instant cult classic.

Matthew McConaughey and Snoop Dog both seemed to be having a lot of fun in this movie, and they both turn in good performances. This is a funny, easygoing stoner comedy .

The central idea is strong and there are moments of genius, but it never quite makes the impact that it should. When the effects wear off, you'll be left feeling empty.

This wannabe Big Lebowski seems more concerned about shock value than telling anything like a compelling story.

Audience Reviews for The Beach Bum

The Beach Bum is my shit. Layers of idiocy, trash, chemicals, undulating bodies, and pure, unfettered joy. I understand if you aren't up for the debauchery, but John Waters would be proud. You may be like one of those people up north of the beach, toiling away in the safe confines of your habituation, annoyed at anyone who disturbs your peaceful boredom, and sneering at any sort of immodesty. I'm kind of like that too. After all, I judge everything with my nose turned up looking out the window of my own insulated little world. And my world is insulated because I'm not rich enough to completely disregard my responsibilities to the rest of my small reality, to free myself and explore it in all of its bizarre splendor. Excuses, excuses - thankfully, there's wish fulfillment for that. Would you go to see a movie about pot-smoking, bongo-playing, half-nude Matthew McConaughey playing a half-nude, pot-smoking, bongo-playing celebrity? It hearkens back to the roots of theater to gape in awe at the petty machinations of the aristocracy writhing in idle wealth. In that sense director Harmony Korine has finally hit a primal nerve in the cinematic experience, one that he's only toyed with in his previous efforts. Spring Breakers, the genetic precursor to this and a divisive masterpiece in its own right managed to encapsulate the grotesque, manic world of the privileged upper middle-class youth. Bored with morality, they enact the fantastic world of extremes promised by late 90s pop and hip-hop songs. It's not a cautionary tale so much as it is an exercise in hedonism, but The Beach Bum is hedonism as an ethos at its fullest fruition. At the risk of sounding like a Marxist, this movie is a cautionary tale of unchecked capitalism. Every moment revels in the luxuries afforded to those who are so steeped in their own material advantage that they are oblivious to consequences of their actions - and they are constantly rewarded for doing so! Moondog (McConaughey) parties to the limits of his being, high on a mediocre poetry career that somehow proves to be visionary despite how inane and puerile it is in substance. His life is a parable to prove that you must "fake it 'til you make it" yet he has forgotten that it was fake in the first place. Doesn't that make it the realest of all? *wink* Even in the face of a life-changing tragedy that sets into motion his need to write the "Next Great American Novel", his main priority remains his liquid wealth and the transient thrills it will afford him. But Korine plays it so straight, demanding that McConaughey always remain relatable and a bastion of the American dream in all of his basest desires. If hedonism is the new morality, the clear virtue of the film is good vibes. What could play out as a very self-serious social critique ends up as a hodge-podge of Cheech and Chong stoner comedy on a VH1 "Behind the Music" redemption arc. It's so tongue-in-cheek that it comes off in earnest, and the movie makes itself available to multiple moods and readings depending on who you are. Like Spring Breakers it will piss off anyone who tries to take it at face value. Even in the modest crowd I was with, one comprised of multiple age demographics, there was a lot of laughter: incredulity, shock, punchlines, and just plain happiness, and the best part was that I was laughing harder than I have in public for a loooong time. God bless you, Moondog. Y'know Jesus was the original sinner.