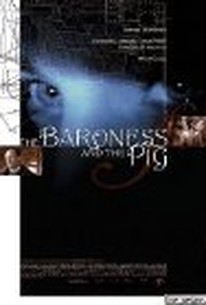 The Baroness and the Pig Photos

A forward-looking woman attempts to teach a primitive child the ways of humanity as her neighbors prefer to remain in the past in this drama from Michael Mackenzie, which he adapted from his own play. In 1888, a wealthy heiress from Philadelphia (Patricia Clarkson) marries a British Baron (Colm Feore) and with him moves to Paris. Since the Baron travels often as he plies his trade as an art dealer, the Baroness finds herself alone at home, without friends or acquaintances. Hoping to attract a circle of intellectually challenging companions, the Baroness takes it upon herself to design a salon, which, along with up-to-the-minute furnishings and impressionist paintings, includes such new technology as electric lighting and a phonograph. However, the Baroness' new salon fails to earn her the respect of her neighbors, who tell the Baron they find his new bride's fascination with technology and democracy boorish and laughable. Making things worse, the Baroness comes to the realization that her husband is more interested in her money than her mind, and his sexual demands of her are brutal and violent. In time, the Baroness devotes her time to a new project -- a feral child (Caroline Dhavernas) has been found in a stable, where she lived with a heard of pigs, and the Baroness takes it upon herself to teach the child to walk, speak, and behave in a civilized manner, a task many believe is doomed to failure. The Baroness and the Pig was screened in competition at the 2003 Sundance Film Festival. ~ Mark Deming, Rovi

Patricia Clarkson
as The Baroness

Colm Feore
as The Baron

Louise Marleau
as The Duchess

Benoit Brière
as The Photographer

Critic Reviews for The Baroness and the Pig

How did writer/director Michael Mackenzie manage to mix all the ingredients for an absorbing historic drama -- an A-list cast, lavish set and costume design, a score by Philip Glass and a gorgeous chateau setting -- into a B-grade gothic melodrama?

The falseness at the film's core comes from the uncritical assumption that the present is wiser than the past.

"The Baroness and the Pig" is an odd duck.

Amateurish details tend to disappear in the face of the superb performances from Clarkson and Feore.

Michael Mackenzie who directed and wrote the film based on his own play has a real feel for melodrama but not subtlety.

There are no featured reviews for The Baroness and the Pig at this time.

The Baroness and the Pig Quotes