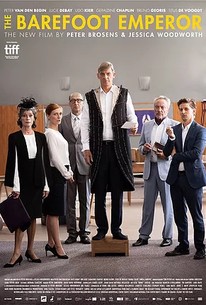 Nicolas III, King of the Belgians, suffers a gunshot wound to the ear during an unfortunate incident in Sarajevo. He wakes up in a sanatorium on a Croatian island that once was Tito's renowned summer residence. The King's entourage tries in vain to protect him from the news that the recent implosion of their kingdom has sparked the collapse of the European Union. The fragile King demands to return home at once, but instead he is condemned to a strict regime of rest and rehabilitation by the authoritarian sanatorium director, Dr. Otto Kroll. A delegation from Vienna arrives headed by the distinguished Dr. Ilse von Stroheim, architect of a nationalist Nova Europa. She bears the thunderous news that the last King of the Belgians will become the first Emperor of Europe. The King, fed up with others determining his destiny, decides to take matters into his own hands.

Critic Reviews for The Barefoot Emperor

At the end of the day, this Barefoot Emperor might get cold feet, though some fun can still be had on the way there.

Barefoot Emperor progresses into an increasingly meandering midsection devoid of concrete elements worth embracing or connecting with...

The satire is toothless, the comedy is flat and the earlier film's mockumentary concept is sorely missed.

Films such as The Barefoot Emperor remind of us the truth in comedy.

Its most subversive highlight is showcasing how history is doomed to repeat itself.

There's a sense that Brosens and Woodworth are... trying too hard to wring the situational laughs out of their audience.

There are no featured reviews for The Barefoot Emperor at this time.