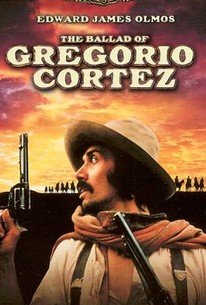 There was a genuine ballad behind this film, based on a real-life character. Cortez, a San Antonio cowpoke, was arrested in 1901 because he resembled the actual criminal. Unable to speak English, Cortez fights off the authorities. His subsequent life as a fugitive forms the core of this independently produced project.

Critic Reviews for The Ballad of Gregorio Cortez

...an indie godfather of Chicano cinema...

An underappreciated classic of the western genre; one that functions as a proto-revisionist piece repositioning one of the stories of the Old West to a Mexican perspective

Olmos is devastating as the titular Gregorio Cortez.

Director and co-scripter Robert M. Young packs his picture with seasoned character actors who add grit rather than glamour.

A subdued revisionist Western based on a Mexican ballad about a true story.

For Director Young, the tragic poignancy derives from the fact that despite rich heritage the alien Anglo culture forced Gregorio to become an outsider and to speak a language that needed translation.

Audience Reviews for The Ballad of Gregorio Cortez

There are no featured audience reviews yet. Click the link below to see what others say about The Ballad of Gregorio Cortez!

The Ballad of Gregorio Cortez Quotes