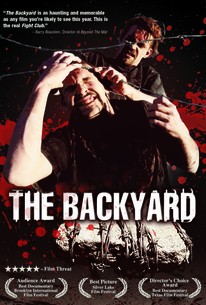 As professional wrestling exploded into new heights of popularity in the 1990s thanks to stars such as "Stone Cold" Steve Austin, The Rock, and Mick Foley, a new breed of amateur wrestling began to grow in its shadow -- "backyard wrestling," in which young fans would recreate the outsized personas and bloody, bone-crushing stunts of the big time wrestlers while adding a few bizarre low-budget touches of their own. The Backyard is a documentary which presents an objective portrait of the bizarre world of backyard wrestling, focusing on the folks in the ring (mostly teenagers) and how and why they literally make themselves bleed for audiences who often number less than a dozen. Some dream of stardom (with a few forming their own semi-pro leagues), while others simply thrive on the attention and adrenaline. The filmmakers also visit with the friends and families of the young grapplers, some of who are genuinely supportive while others are visibly appalled at the antics in the makeshift rings. WWE star Rob Van Dam also makes a guest appearance. The Backyard had its world premier at the 2002 South by Southwest Film Festival, and has since won prizes at the 2002 Edinburgh International Film Festival, the 2003 Texas Film Festival, and the 2003 Brooklyn Film Festival.

Critic Reviews for The Backyard

Tawdriness aside, The Backyard is remarkable for the intensity of the interviewees, who show a new kind of all-American gumption in the way they filter the mannerisms of low-rung celebrities through their own geeked-out, violent imaginations.

Those who've wondered whether TV's WWF show wrestling might have a detrimental effect on impressionable youth will gloat over The Backyard.

Warped entertainment? Yes. Sophisticated? No. And that goes for the movie as well as for the participants.

Yes, it's hard to watch, but, like a train wreck, it's also hard not to.

What is going on here? Most would say a lot of incredibly dangerous and stupid activity, and most of the people in this documentary not surprisingly seem none too bright.

If you were depressed about the future of America before, you'll be doubly depressed after seeing this film.

It's unflinchingly honest (and unlike hysterical media reports on the phenomenon, balanced)

Though engaging from beginning to end, be warned that this is also harrowing, utterly depressing stuff.

Chances are you'll probably watch most of this documentary with both hands over your eyes, but if your curious about just what kind of insanity the kids in the heartland are getting up to these days, you won't want to miss it.

Eventually you realize the whole movie has been about young showoffs who think it's uproarious to gross out neighborhood grownups.

Fascinating -- everything Beyond the Mat wasn't.

Audience Reviews for The Backyard

There are no featured audience reviews yet. Click the link below to see what others say about The Backyard!