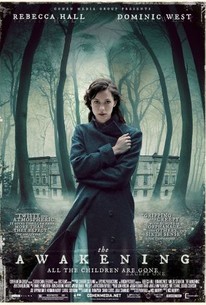 Critics Consensus: The Awakening never quite quickens the pulse the way it should, yet it remains a well-acted and handsomely assembled example of an old-fashioned supernatural thriller.

Critics Consensus: The Awakening never quite quickens the pulse the way it should, yet it remains a well-acted and handsomely assembled example of an old-fashioned supernatural thriller.

Critic Consensus: The Awakening never quite quickens the pulse the way it should, yet it remains a well-acted and handsomely assembled example of an old-fashioned supernatural thriller.

Set in London in 1921, Florence Cathcart (Rebecca Hall), author of the popular book "Seeing Through Ghosts," has devoted her career to exposing claims of the supernatural as nothing but hoaxes. Haunted by the recent death of her fiancé, she is approached by Robert Mallory (Dominic West) to investigate the recent death of a student at the all-boys boarding school where he teaches. When students at the school report sightings of the young boy's ghost, she decides to take on the case. Initially, the mystery surrounding the ghost appears nothing more than a schoolboy prank, but as Florence continues to investigate events at the school, she begins to believe that her reliance on science may not be enough to explain the strange phenomenon going on around her. -- (C) Cohen Media Group

News & Interviews for The Awakening

View All The Awakening News

Critic Reviews for The Awakening

Though the story spirals a little out of control in the film's final scenes, "The Awakening" offers the low-key pleasures of an old-fashioned thriller and a lovely central performance.

The cast is anchored by two wonderful actresses: Imelda Staunton and Rebecca Hall, whose talents are squandered on this lackluster horror drama.

When these sudden surprises work, as in "A Beautiful Mind" or "The Others," you're too stunned to swallow that next handful of popcorn; when they don't, you're tempted to throw your whole box at the screen.

A dull British import that never lives up to the pretensions of its period setting.

An enjoyably old-fashioned ghost story in the vein of "The Others" and "The Orphanage."

It is beautifully shot and the scenery and the ambience of a large haunted house is wonderfully captured, but can this film be the upstart for the modern British horror?

A criminally derivative and besotted example of the ghost thriller genre.

The raison d'être is ludicrous and sewn up in minutes, but the cast is very good, as is the cinematography and symbolism.

Tabloid is a deeply personal, yet light-hearted piece of satire lovingly captured through Morris' mesmerising gaze.

The performances are fantastic, especially Staunton who is perfectly cast.

I do not normally ever say this, but The Awakening actually offended me it was so egregiously bad.

Audience Reviews for The Awakening

Despite a promising beginning and a solid art direction, this conventional ghost story never goes beyond its clearly derivative narrative - which, among many deficiencies, tries to be clever with a lame (and unnecessary) twist but is only convoluted and obvious.

Saved by a decent twist at the end, but is pretty dull viewing getting there. I was glad I stuck with it, though - genuinely creepy at the end.

in the beginning of the movie really I didn't find it attractive, and during it there were alot of ups and downs, some were boring and make no sense, and other were a confusing nice tension, but in the last 30 min I figured all the things out,really it was an amazing end.

A more than average British thriller that excites the senses.