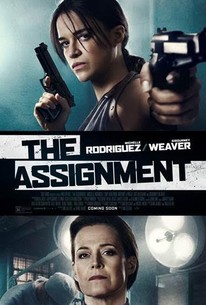 Critics Consensus: The Assignment's premise is bizarrely intriguing; unfortunately, it's also just one of many ingredients fumbled in a disappointing misfire from director Walter Hill.

Critics Consensus: The Assignment's premise is bizarrely intriguing; unfortunately, it's also just one of many ingredients fumbled in a disappointing misfire from director Walter Hill.

Critic Consensus: The Assignment's premise is bizarrely intriguing; unfortunately, it's also just one of many ingredients fumbled in a disappointing misfire from director Walter Hill.

Legendary director Walter Hill (The Warriors) gives the revenge film a modern neo-noir twist with this electrifying thriller. Hitman Frank Kitchen (Michelle Rodriguez) is given a lethal assignment, but after being double-crossed, he discovers he's not the man he thought he was-he's been surgically altered and now has the body of a woman. Seeking vengeance, Frank heads for a showdown with the person (Sigourney Weaver) who transformed him, a brilliant surgeon with a chilling agenda of her own.

Lauro Chartrand
as Cousin in Vegas

News & Interviews for The Assignment

On DVD This Week: Beauty and the Beast, A United Kingdom, and More
Latest Smurfs Gives Critics the Blues

View All The Assignment News

Critic Reviews for The Assignment

Has enough skill and personality going for it to make it worth checking out, even if it doesn't quite live up (or down, depending on your perspective) to its borderline sleazy premise.

"The Assignment" is an embarrassment all around, a murky, regrettable piece of gutter cinema. Next year's Razzie Awards race starts here.

The Assignment isn't quite as nutso and passionate as it ought to be. Even the violence, gritty at times, feels a little impersonal and detached. But the film's tawdry precision is compelling by itself.

There's howlingly awful and then there's "The Assignment," a thoroughly ridiculous, numbingly slow neo-noir thriller about a low-life hit man forcibly given gender reassignment surgery by a vengeful doctor.

This is perhaps the angriest movie Hill - longtime specialist in tough-guy fare such as "The Driver," "Last Man Standing," "Red Heat" and "Bullet to the Head" - has ever made.

The tricksy structure doesn't have much of a payoff (even though Mr. Hill constructs sequences with deft fluidity). And the role of the surgically altered assassin defeats poor Ms. Rodriguez.

Grindhouse groupies will have something to celebrate with the latest offering from maverick auteur Walter Hill, the simultaneously shameless, trashy, and generously entertaining The Assignment.

'The Assignment', with its tone changed, is a mere food product that goes from a research drama to pure and hard-acting film in its final stretch. [Full Review in Spanish]

It's vintage meat-and-potatoes Hill, but any sense of low-brow, comic book fun continually crashes against a concrete wall made of one-note performances and a lunkhead, monologue-heavy script.

The Assignment feels like a case where the audacity of the premise and the talent attached to the project kind of supercede the ultimate quality of the film, making it a must see for Hill or Weaver fans. Aside from that premise, the film struggles.

So much of "The Assignment" is offensive. Rodriguez and Weaver both try to enhance the lousy material, but these fine actors deserve better than this lousy B-movie

Terrific noir thriller. Rodriguez is daring, provocative and sensational as a hitman. A must-see, so rent or buy it.

Audience Reviews for The Assignment