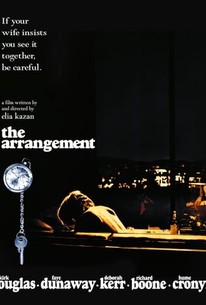 Florence Anderson (Deborah Kerr), the long-suffering wife of advertising executive Eddie (Kirk Douglas), struggles to understand her husband's affair with Gwen (Faye Dunaway). Eddie goes East to tend to his ailing father Sam (Richard Boone), telling his wife he is done with his affair with Gwen. In an awkward scene, both women attend the funeral of Eddie's father. Arthur (Hume Cronyn) is the family attorney who must untangle the legal mess in the wake of Sam's death. There are some light comedy interludes in this uneven drama taken from director Elia Kazan's 1967 novel. Nudity and four-letter words are plentiful.

Critic Reviews for The Arrangement

Kazan seems to have turned his search for identity into a callous soap opera, unworthy of a man of Kazan's true talent.

The final result of Kazan's dark night of the soul is, tragically, pure american kitsch.

The movie has all the faults of the book, and then some, and you can't skip pages.

Puffy, artsy to the point of ennui, epic where it should be personal, personal where it doesn't matter, drifting, senseless, pointless, irrelevant and dull.

[The Arrangement] plays like a television or radio set with the volume turned up too loud. Everyone comes on strong and loud -- not good, just loud.

As soon as the characters begin the laborious process of self-analysis, the parade of guilts and obsessions could be marshaled and set in action by any halfway assiduous reader of Time magazine.

What anchors the film in place are the performances of Douglas, Deborah Kerr as his wife and most especially a positively glowing Faye Dunaway.

Audience Reviews for The Arrangement

A chaotic but thrilling collage of semi-formed ideas. There are as many moments of inspired acting as there are moments of miscalculation and confusion. Visually wild and very different from most of Kazan's other work.

Flat searching for meaning drama with high quality cast ill served by the director and script. Deborah Kerr's role as a doormat of a wife is beneath her. Faye is incredibly beautiful here.