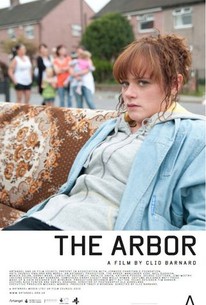 Instead if making a conventional documentary or adapting Dunbar's play The Arbor for the screen, director Clio Barnard has crafted a truly unique work that transcends genre and defies categorization. Following two years conducting audio interviews with Dunbar's family, friends and neighbors, Barnard filmed actors lip-synching the interviews, flawlessly interpreting every breath, tick and nuance. The film focuses in particular on the playwright's troubled relationship with her daughter Lorraine who was just 10 when her mother died. Barnard re-introduces Lorraine, to her mother's play and private letters, prompting her to reflect on the extraordinary parallels between their lives. Interwoven with these interviews are staged scenes of Dunbar's play filmed on The Arbor, the street where she lived. -- (C) Strand

Natalie Gavin
as The Girl

News & Interviews for The Arbor

View All The Arbor News

Critic Reviews for The Arbor

Documentaries often toy with the conventions of non-fiction storytelling to the detriment of their content, but Clio Barnard's innovative The Arbor provides a welcome exception to the norm.

Numerous celluloid experiments have fudged reality and fiction lately, but few are as formally inventive or socially revelatory as The Arbor.

For the morbidly curious, it's mesmerizing. But it's also a singularly watchable story for the strange, and strangely fitting, way in which it's told.

Barnard's boldest move is to unveil the irresponsible chaos of the playwright's private life, and to make us wonder if the art was worth the suffering, after all.

Brings the Dunbar story to life through a technique known as "verbatim theater," in which actors lip-synch testimony from the real people they're portraying.

Though The Arbor is hard to watch, it's even harder to define, but it's clear that this is Andrea, this is England, and this is extraordinary.

Ms. Barnard illustrates in heartbreaking fashion how the cycle of familial neglect, low self-esteem and self destruction completely ruined lives that were once so full of promise.

What emerges is a curious mix of avant-garde technique and social-realist case study, equally indebted to Barnard's art-world-video background and Dunbar's own close-to-the-bone writing.

This is a fiercely intellectual piece of cinema that still manages to grab your heart and punch you in the gut.

Audience Reviews for The Arbor

The Arbor may suffer a bit from following an uncomfortable line between documentary and drama but it is for the most part effective. We have some actual people from Andrea Dunbar's life and actors lip synching words from others. I don't know why we don't have those individuals on camera but it only hurts mildly. This film is less about Dunbar and more about her daughter Lorraine who's life can truly be pitied.

I'll bet you've never seen a documentary quite like "The Arbor." In this movie, ostensibly about the late playwright Andrea Dunbar, it has actors lip-synching testimony given by friends and relatives. But the story does not stop with her death, as it continues with her three children, especially the oldest, Lorraine, whose father is of Pakistani origin at a time when racism was particularly virulent. Actually, "The Arbor" is an incisive documentary about how much a person's life is defined by their environment and how they are raised. There is plenty of archival footage comparing the poverty strewn streets of Andrea's time to the present, along with scenes peformed outside there from one of her plays carried out in front of an appreciative audience. It was presumed by outsiders with the success she had that she would use it to escape but she never did make it out, spending much of her free time in the local pub. When it came to her three children, two would go on to live apparently stable lives. It is Lorraine that has the troubled life of tragedy, as sexual abuse is mentioned also.

Interesting if gruelling study of how 'grim up north' things can get. Novel use of actors miming spoken testimonies from the real people involved. Ken Loach minus the humour.