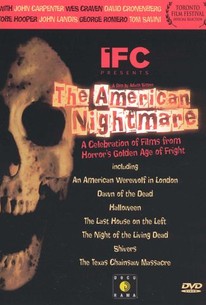 In the late '60s, the tone of American horror films began to shift in the wake of the startling success of George A. Romero's Night of the Living Dead -- horror films became gorier, bleaker, and began to subtly reflect the political and social upheaval gripping the country. Through the '70s and '80s, films like Last House on the Left, The Texas Chainsaw Massacre, and Halloween held a distorted mirror up to American culture, reflecting its fear and chaos in the wake of Vietnam and Watergate. The American Nightmare is a documentary that looks at the transgressive horror films of the '60s and '70s and the people who made them. Directors Wes Craven, Tobe Hooper, and David Cronenberg, special effects man Tom Savini, and film critics Tom Gunning and Adam Lowenstein are among those interviewed by director Adam Simon. The American Nightmare was produced for the premium cable outlet The Independent Film Channel.

Critic Reviews for The American Nightmare

Although several segments will appeal to horror aficionados, it often feels like a political statement couched in a format that will appeal to the blood and popcorn crowd.

Audience Reviews for The American Nightmare

A good intro to select horror classics of the 70s. The best part of this documentary is that it is padded by interviews with the directors and film-makers. This group of film-makers examines the themes and subtext of their own and their peers' work, and how this greatly affected the path horror film-making took afterwards. Also, you might find a gem you haven't gotten around to yet.

An interesting doc that ties in the social events that lead to some of the greatest American horror films of the seventies. For those well versed in the horror genre, there is nothing that new here, but it s a very interesting watch.