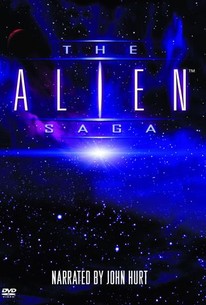 Originally aired on AMC, this documentary focuses on one of the most horrifying series ever to be committed to celluloid -- the Alien film series. With interviews from most of the main players, including Ridley Scott, James Cameron, Sigourney Weaver, and H.R. Giger, the special goes through conception through production of all four films released from 20th Century Fox. Narrated by the Alien's first-ever onscreen victim, John Hurt, The Alien Saga gives insight into various script changes, casting choices, and the series fantastical effects through the eyes of the innovators behind them. The same production team, headed by writer/director Brent Zacky, also produced the equally exhausting horror film series documentary The Omen Legacy.

Critic Reviews for The 'Alien' Saga

There are no critic reviews yet for The 'Alien' Saga. Keep checking Rotten Tomatoes for updates!

There are no featured reviews for The 'Alien' Saga at this time.