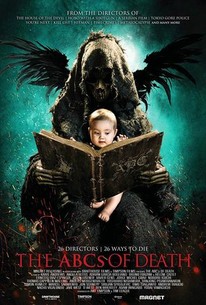 Critics Consensus: As is often the case with anthology films, The ABCs of Death is wildly uneven, with several legitimately scary entries and a bunch more that miss the mark.

Critics Consensus: As is often the case with anthology films, The ABCs of Death is wildly uneven, with several legitimately scary entries and a bunch more that miss the mark.

Critic Consensus: As is often the case with anthology films, The ABCs of Death is wildly uneven, with several legitimately scary entries and a bunch more that miss the mark.

The ABCs of Death Photos

Twenty-six directors. Twenty-six ways to die. The ABC's OF DEATH is perhaps the most ambitious anthology film ever conceived with productions spanning fifteen countries and featuring segments directed by over two dozen of the world's leading talents in contemporary genre film. Inspired by children's educational books, the motion picture is comprised of twenty-six individual chapters; each helmed by a different director assigned a letter of the alphabet. The directors were then given free reign in choosing a word to create a story involving death. Provocative, shocking, funny and ultimately confrontational, THE ABC's OF DEATH is the definitive vision of modern horror diversity. (c) Magnolia

News & Interviews for The ABCs of Death

View All The ABCs of Death News

Critic Reviews for The ABCs of Death

It presents 26 disparate (read: in need of an editor) slices of dicing from 26 directors you've almost certainly never heard of (and indeed, the one you have - Ben Wheatley - feels tainted by association).

The fans will love. The faint-hearted won't.

Gives a sense of horror movie making learned by rote - at a boy's school where girls have been admitted under sufferance.

Most are exercises in sickening bad taste, with an emphasis on human bodily functions.

At its best when merging shocks with social commentary, this halting compilation improves significantly as it nears the end of the alphabet.

An enormously impressive and massively indulgent cornucopia of 26 short films from all over the world.

With each segment running at roughly five minutes in length, there's an inordinate amount of forgettable entries, but that's not to say it's not worth a look.

The real standout is "Dogfight" from Marcel Sarmiento, an unsettling piece that lingers longer than any other story here.

The ABCs of Death's overriding air of experimentalism is its ultimate downfall. Where some are undeniably mesmeric, the majority of the films seem like student projects -- not efforts from established filmmakers.

If The ABCs of Death 2 seems like a slight improvement over its predecessor, that's simply due to the fact that it achieves a more consistent level of mediocrity.

There are some good shorts in The ABCs of Death, and yet they're all overshadowed by some of the most awful, idiotic, infantile material I've ever seen in any film.

This is an experimental horror film with 26 directors around the world each making a short film about death. Given the format, it is no surprise there are few hits and a lot of misses.

Audience Reviews for The ABCs of Death

It is uneven like most anthologies, with segments ranging from scary to funny to clever and silly - and as such, some of them are quite efficient while many are far from that, like "M Is for Miscarriage" and "Z is for Zetsumetsu," both which stand out as particularly awful.

Was this supposed to be scary? Was this supposed to be a comedy? At the end of the day it doesn't matter, when the only thing "The ABCs of Death" turns into is an example of what happens (most of the time) when directors serve as their own writers. In my mind, going down as a tonally confused version of something out of the "Faces of Death" series, "The ABCs of Death" is a compilation of 26 short films, where the overall idea was to give 26 directors (from all over the world) each a letter of the alphabet and have them each make a short segment showcasing death using a theme which begins with their designated letter. But while we (the audience members) are lead to believe that each director has set out to work within the confines of their letter in order to bring forth something interesting, problems arise when it quickly becomes apparent how aggressively incoherent, aggressively disgusting (but not in a scary way) and just downright boring "The ABCs of Death" actually is. Much of this movie is a mixture of segments which are visually well crafted, but far too conceptually strange, segments that are meant to be funny, but are far too conceptually strange and the segments which are downright gross, and while aren't as conceptually strange, are simply nonsensical. But maybe the biggest problem here is that most of these said segments aren't scary at all. Even those directors, who came forth with the intention to scare, showcase segments of death tamer than anything you could see in an episode of "1000 Ways to Die". A Quick Heads Up: The best segment (by far) is entitled "Q is for Quack" by filmmaker Adam Wingard, who seems to be the only writer/director thinking outside of the box. But even though this is one of the funniest film shorts I've ever seen (I'm not kidding) what you have to wade through to get to it, is sadly not worth your time. Anyway, I'm sure you can find this segment on YouTube or somewhere else for free. The only other segment which rivals Wingard's film is entitled "X is for XXL", which is undoubtedly the most visually impressive and is in fact the scariest segment in this supposed horror movie. Final Thought: Maybe I was naive to think that a movie entitled "The ABCs of Death" would be scary or even have a fraction of Twilight Zone-ish sensibility, but I would be shocked if said egregious lack of scares isn't the final nail in the coffin which distractingly kills off anything good about this film experiment, as an entire piece. Written Markus Robinson, Edited by Nicole I. Ashland Follow me on Twitter @moviesmarkus

The ABCs of Death Quotes