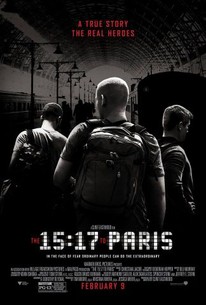 Critics Consensus: The 15:17 to Paris pays clumsily well-intentioned tribute to an act of heroism, but by casting the real-life individuals involved, director Clint Eastwood fatally derails his own efforts.

Critics Consensus: The 15:17 to Paris pays clumsily well-intentioned tribute to an act of heroism, but by casting the real-life individuals involved, director Clint Eastwood fatally derails his own efforts.

Critic Consensus: The 15:17 to Paris pays clumsily well-intentioned tribute to an act of heroism, but by casting the real-life individuals involved, director Clint Eastwood fatally derails his own efforts.

In the early evening of August 21, 2015, the world watched in stunned silence as the media reported a thwarted terrorist attack on Thalys train #9364 bound for Paris, an attempt prevented by three courageous young Americans traveling through Europe. The film follows the course of the friends' lives, from the struggles of childhood through finding their footing in life, to the series of unlikely events leading up to the attack. Throughout the harrowing ordeal, their friendship never wavers, making it their greatest weapon and allowing them to save the lives of the more than 500 passengers on board.

Critic Reviews for The 15:17 to Paris

They're all handsome but just appalling actors. This disjuncture is impossible to forget while watching the film, and it's very uncomfortable.

Despite good intentions, the movie never lives up to the breathless excitement the real-life story promises.

"The 15:17 to Paris" suffers from an excess of dramatic wadding, and the over-all effect is too muffled and often too dull, sadly, to make an impact.

The action sequence on the train is truly remarkable, and Eastwood shoots with a documentary-style immediacy, but the surrounding film - especially the script and performances - doesn't serve this thrilling true-life story, or the audience.

The 15:17 to Paris shows that the 87-year-old director is still capable of surprises.

These scenes flow like treacle and then the movie really slows down.

It's a mixed bag of results, but I'm mildly recommending it for the novelty factor.

That trademark Eastwood lack of sugar coating is what makes its inciting event memorable.

Sad that we never really got to know their three protagonists more than the forced attempt to sell what they did. A big disappointment. [Full Review in Spanish]

For evidence of why narrative filmmaking is generally assisted by the designation of actors who have learned at least some facets of their craft, look no further than Clint Eastwood's egregiously inauthentic experiment.

A formless, narratively inert nothing of a movie that often feels like watching someone's home movies of their trip to Europe for an hour and a half.

Audience Reviews for The 15:17 to Paris

A interesting touch casting the real life heroes in this docu-drama, well written and photographed. Eastwood does a capable job but not his best by any stretch. Worth watching! 06-14-2018

An ineptly-written movie that doesn't know how to build momentum and cannot find a good reason to justify us watching the lives of these three people ever since they were kids, becoming only dull as we follow them in every single step of their trip until they finally get to the train.

ATTEMPTED MURDER ON THE DISORIENTED EXPRESS - My Review of THE 15:17 TO PARIS (2 1/2 Stars) Clint Eastwood is 87 years old. Say what you will about his politics, or the...ahem....pacing of some of his films, he has directed two Oscar winning best pictures, and still cranks out one or two movies a year. He's 87, people! 87!!! Most people his age don't live to be his age! And yet, here he is churning out another film in his "What Makes An American Hero" series (AMERICAN SNIPED, SULLY) with THE 15:17 TO PARIS, the true story of three lifelong Sacramento besties who thwarted a terrorist attack aboard the titular train. Like SULLY before it, I wondered how such a short moment in time could be made into a movie. SULLY answered that question by repeating the incident over and over and padding it out with a hearing that never took place. THE 15:17 TO PARIS, written by first timer Dorothy Blyskal, pads out an admittedly thrilling 10 minute sequence with 80 some minutes of clunky childhood backstory and the overuse of a selfie stick throughout Europe. The swinging for the fences stroke of genius idea, however, has Eastwood casting the actual heroes in the lead roles. In concept alone, I admire the attempt. It's fresh and rare. The fact that Eastwood and Warner Brothers are willing to risk telling such an iconic tale with non-actors playing themselves, which is much harder than it looks, earns my respect. A shame the film falters as much as it does. Anthony Sadler, Alek Skarlatos, and Spencer Stone are true heroes. They saved a lot of lives that day in 2015 and nobody can ever take that away from them. I would imagine they would be the first to admit that they're not actors. It would have been so easy to cast Michael B. Jordan, one of the Chris' (Pratt, Pine, Evans....whatever), and a Hemsworth or two, soup up the action a little mores and have an action blockbuster on their hands. Eastwood and Co., however, are after something more intimate by giving us a trio of average troublemaking kids who grow up to love their country and randomly find their moment while galavanting across Europe. Sadly, the script has one groaner line after another and stiff line deliveries don't help matters much. Sadler has a little charm, but gets saddled with exactly one unflattering characteristic, the endless need to document every moment with his selfie stick. Skarlatos, who winningly competed on DANCING WITH THE STARS, struggles the most here with a total absence of charisma, which leads me to think he should stick to dancing. That may be the most absurd sentence I've ever typed. Stone, however, in a role more layered than the others, actually does quite well. He's got the zip and unpredictability of a young Woody Harrelson. Now don't get me wrong, I do NOT want him showing up next in one of those FAST & FURIOUS movies, but he touched me, what can I say? In a film overstuffed with strong actors such as Judy Greer and Jenna Fischer along with not bad cameos by Thomas Lennon, Tony Hale, and Jaleel White, it's that much more noticeable when our leads struggle to bring their characters/themselves to life. The script meanders through their childhood antics, but the point is made clear. Ordinary people do extraordinary things. The young Anthony and Spencer don't do so well with their scenes, but Bryce Gheisar as young Alek has a nice melancholic presence. Between this film and his wonderful performance as the best friend in WONDER, he's a child actor to watch. He's better at playing Alek than Alek is at playing Alek! Things get uncomfortable, and quite boring, when the trio make their way through Europe, with all the obvious excitement gelato, drinking, clubbing, and more selfies bring to the equation, although I was tickled by the fact that 87-year-old Eastwood staged a scene with stripper poles, endless shots, sick beats, and people grinding all up against each other. Elderly directors don't all want to make THE BUCKET LIST, ok? But that train sequence. It's what we all want to see and it more than lived up to what I had hoped. Shooting in a lively docu-style, Eastwood achieves the immediacy, the terror, and the visceral qualities of the violence quite well. It's an act of heroism that made me cry. My emotional connection to this moment had me rethinking the entire film experience. Yes, it's pretty bad, but I still felt something. I knew I was witnessing that moment where people decide to act on instinct and make a difference. They didn't plan it. They didn't set out to be heroes. They bravely just did the right thing. A Hollywood-ized version of this story would not have had the same impact. It may have had a better sense of pace and false dramatics, but this somewhat failed experiment has the distinction of putting you right there inside the experience. It's a shame that it kinda sucks, but I still applaud the outside-the-box approach.