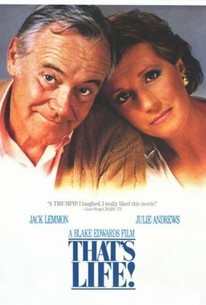 Blake Edwards co-wrote and directed this seriocomedy about a couple of rich and famous Malibuans forced to re-examine their lives and values during a weekend party celebrating the husband's 60th birthday. Jack Lemmon and Julie Andrews star as Harvey and Gillian Fairchild. Harvey is a successful architect who has attained his wealth by flattering his rich clients and compromising his ideals. Although he has everything he could want out of life, he is still unhappy. He looks at himself in the mirror and sees a middle-aged man who hates himself, feels that his children don't love him, and thinks that he is dying. Gillian, a successful singer, tries to bolster his self-confidence so that he can have a wonderful birthday. But she has problems of her own -- she has just returned from her doctor, who has informed her that she may have throat cancer. The doctor won't know for sure until the tests come back on Monday. In the meantime, Gillian tries to keep up a brave front for Harvey's celebration.

Donna McMullen
as Woman in E.R.

Honey Edwards
as Honey
View All

That's Life has many moments of truth and some good performances. But it's not all of a piece; not every scene seems to have been thought through on the same level. Tone is everything in a film like this.

The short script lacks originality, but the abilities of the director and actor allow it to stay afloat. [Full Review in Spanish]

Crisis-driven melodrama, all very glossy and tasteful, and it tastefully tires, too.

Lemmon in his bvds? What's not to LOVE!

Salutes a nurturing woman who gives all she's got to her fretful husband over the weekend he's going to celebrate his sixtieth birthday.

There are no featured reviews for That's Life! at this time.