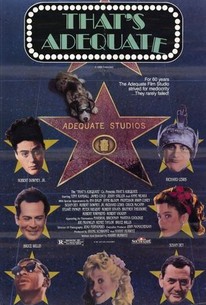 Fans of movie industry satire will want to see That's Adequate, an all-star production which spoofs the popular series of documentary films honoring MGM's musical comedies, That's Entertainment. Narrated by Tony Randall, this mock-history chronicles the film output of the second-rate "Adequate Film Studios" during its six precarious decades of existence. At times the humor gets very broad, including a fair amount of vulgarity. We see clips from such Adequate Studios monstrosities as "Singing in the Synagogue," and "Sluts of the South." Some of the stars enlivening these parodies are Bruce Willis, Robert Downey, Jr., James Coco, Anne Meara, Professor Irwin Corey, Jerry Stiller and Robert Vaughn.

Marshall Brickman
as Himself

Joe Franklin
as Himself

Martha Coolidge
as Herself

Renée Taylor
as Herself

Bruce Willis
as Himself

Leo Steiner
as Himself

There are no critic reviews yet for That's Adequate. Keep checking Rotten Tomatoes for updates!