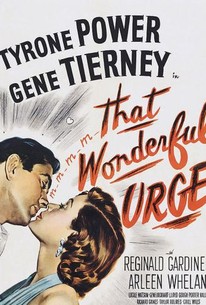 That Wonderful Urge is the second remake of Love is News (37), and is much closer to the original than the first remake (the Betty Grable musical Sweet Rosie O'Grady). Tyrone Power repeats his role from the 1937 film as a handsome reporter who targets a flighty heiress (Gene Tierney, taking over from Loretta Young) for ridicule. Sick of unwanted public attention, the heiress announces that she has secretly married Power, forcing him to endure the spotlight for a change. Several crosses and double-crosses later, Power and Tierney find that they're really in love after all. Personal item: This writer's favorite version of Love is News is the 1940 radio adaptation, which starred a wildly adlibbing Bob Hope.

Chill Wills
as Justice of the Peace, Homer Beggs

Robert B. Williams
as Special Policeman

Critic Reviews for That Wonderful Urge

Audience Reviews for That Wonderful Urge

Back in the good ole days (which usually refers to the Depression if I understand it correctly) nobody had nothing so it was okay to dream of being rich while simultaneously detesting those who were. Things sure have changed boyo. With that in mind, Tyrone Power reprises his role as the reporter who terrorizes a Kardashian-type heiress ... and then falls for her. The script and the situations are practically identical to the original ("Love Is News") and so the big difference here, besides Ty being 10+ years older (and that counts) is Gene Tierney in the Loretta Young heiress part. She lacks the panache of Young, yes, but Ty and she have some chemistry that sells the production after all. S'okay.

That Wonderful Urge is a remake of Love Is News but has definitely lost most if not all of the zip of the original. Gene Tierney looks great and is as charming as the reworked character allows but the whole thing just doesn't work very well. The supporting cast here is also not as good with only the great Lucile Watson being noteworthy and she is criminally underused.