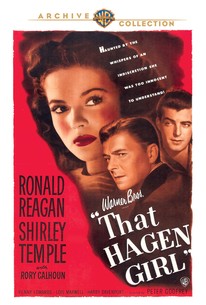 In this film, a girl is adopted into a small-town family, but instead of finding happiness, she finds her life a living nightmare due to neighbors' constant speculation as to the father's identity. The scuttlebutt is that she is the illegitimate daughter of a prominent lawyer and former resident.

William B. Davidson
as Mr. Bowman

William Edmunds
as Corey, the Chauffeur

Jack Smart
as Man in Drugstore

Jack Mower
as Man in Drugstore

Florence Allen
as School Board Member

Ed Russell
as School Board Member

Billy Roy
as Boy
View All

Critic Reviews for That Hagen Girl

The most painful part of this very painful picture is the contrast it insists on between Miss Temple and the rest of the cast.

They shouldn't do such things to Shirley. It's downright un-American!

This is an oddity not only for the casting of future politicos Reagan and Temple in the same film, but due to its rotten script and nearly incomprehensible resolution.

You can literally hear this drama creaking.

Audience Reviews for That Hagen Girl

There are no featured audience reviews yet. Click the link below to see what others say about That Hagen Girl!