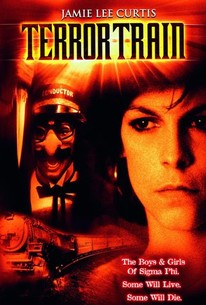 During a New Year's party aboard a moving train, a college fraternity begins losing members and collecting corpses. It would seem that after being the victim of a cruel hazing prank by the aforementioned frat, a mentally fragile student arrives in costume to take his revenge upon the lot. Features a loud performance by Jamie Lee Curtis, and David Copperfield appears as a magician, of all things.

Nadia Rona
as Corpse
View All

Better than most of its kind.

The classic horror films of the 1930s appealed to the intelligence of its audiences, to their sense of humor and irony. Movies like Terror Train... just don't care. They're a series of sensations, strung together on a plot.

Terror Train is at best workmanlike in its matter-of-fact killings and downright silly and nonsensical in the way the mystery and fake-outs are handled.

Really darn great by slasher standards, and even kind of pretty good by the standards of decent, functional, God-fearing modes of cinema.

A run-of-the-mill slasher film whose central gimmick is setting its action on a train.

Just a little more skillfully done than many of its contemporaries, and whatever esteem I have for it is largely nostalgic, but at least it tries to be different.

Sends you a chill down the spine that won't subside until those final few minutes...see it before the upcoming remake

Holds the tension in a bone-chilling manner.

Claustrophobic settings are perfect to induce anxiety because the feeling of no escape slowly creeps in. 'Terror Train' is a senselessly amateurish affair and not an iota of originality springs from the locomotive-bound milieu. Naturally, the slice-and-dice victims are members of a sex-starved fraternity and as per usual, the bloodshed is supposedly vengeance for a particularly cruel prank (a pledge is almost coerced into necrophilia). To say that the cloak-and-dagger Agatha Christie mystery is completely telegraphed is putting it mildly. Anyone who can't determine the killer's identity must be hopelessly naïve. The high-key lighting on the cabin corridors sullies most of Roger Spottiswoode's forays into scare tactics until the lights finally dim in the taut final half-hour. I wouldn't be astonished to learn that a ghost director was hired for this section because the film drastically improves with a volcanic chase between Jamie Lee Curtis and the killer (the murderer creepily wriggling down a window behind a nearly unconscious Curtis is spectacular). The only other point of interest and sparkling showmanship is David Copperfield brandishing some magician tricks such as a cigarette penetrating a quarter. This could've easily been transmogrified into a Cameron Crowe coming-of-age story about embarking on the last laps of college and how relationships were forged or splintered during the intervening years. The slothfully paced 'Terror Train' is surprisingly scant on gore but it doesn't equalize with rip-roaring intensity (although a hide-and-seek scene inside Doc Manley's (Hart Bochner) reclusive compartment is heart-palpitating). On a sidenote, a lizard costume-adorned casualty with a booze bottle embedded in his mouth looks like he accidentally died of alcohol poisoning.

Mediocre slasher from the 80's. Interesting setting for a slasher film having it unfold onboard a train, but that's about the only bit of originality about it. The kills themselves are mostly gore-free and tame, and the killers' big reveal is predictable. The best moments are of David Copperfield's tricks during his cameo appearence.

This is just an average slasher movie, it seems to try to be a train mystery movie at the same time, but it really isn't. This movie is really boring most of the time. I didn't like this one at all, and I don't recommend seeing it.

Terror Train is essentialy another Halloween clone. The only difference is that the murders are happening on a train. The film stars scream queen Jamie Lee Curtis, and she seems kinda out of her element in this film, I mean it looks as she's bored with the story. Whatever it is, she lacks the strentgh of her earlier Horror films. But somehow, she manages to still give a decent enough performance. Even though that this isn't her best role, the film is actually pretty good for what it is. Terror Train is still a enjoyable horror film with many creepy, suspenseful moments. I thought that it was a good slasher film with plenty of creative kills. Though not as memorable as Halloween or Friday The 13th, Terror Train is still a good enough entry in the slasher. Terror Train is still a fun ride through terror and madness. Not one of the most memorable or inventive Slasher flicks from the early 80's, Terror Train is still far from the worst. A thing that I thoroughly enjoyed about the film is that the killer changes his disguise constantly, and you're always left guessing who it is. Terror Train Provides a tense, thrilling mood with a decent cast, Terror Train is a neat slice of terror from the early 1980's. Worth a viewing, but don't expect it to be as good as Halloween or Friday The 13th. Roger Spottiswoode first directorial offering is a fun film to watch with friends, despite it's flaws. Then again is there such a thing as a flawless 80's slasher? Sottiswoode's direction is eerie and claustrophobic, he definitely knows how to get the right angles to make a scene look creepy and horrifying. Terror Train is worth a watch and is a must see for fans of cheesy slasher films.