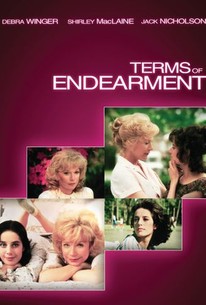 Critics Consensus: A classic tearjerker, Terms of Endearment isn't shy about reaching for the heartstrings -- but is so well-acted and smartly scripted that it's almost impossible to resist.

Critics Consensus: A classic tearjerker, Terms of Endearment isn't shy about reaching for the heartstrings -- but is so well-acted and smartly scripted that it's almost impossible to resist.

Critic Consensus: A classic tearjerker, Terms of Endearment isn't shy about reaching for the heartstrings -- but is so well-acted and smartly scripted that it's almost impossible to resist.

Terms of Endearment covers three decades in the lives of widow Aurora Greenaway (Shirley MacLaine) and her daughter Emma (Debra Winger). Fiercely protected by Aurora throughout childhood, Emma runs into resistance from her mother when she marries wishy-washy college teacher Flap (Jeff Daniels). Aurora is even more put out at the prospect of being a grandmother, though she grows a lot fonder of her three grand-kids than she does of her son-in-law. Flap proves that Aurora's instincts were on target when he enters into an affair with a student (Kate Charleson). Meanwhile, Emma finds romantic consolation with an unhappily married banker (played by John Lithgow, who registers well in a rare "nice guy" performance). As for Aurora, she is ardently pursued by her next-door neighbor, boisterous astronaut Garrett Breedlove (Jack Nicholson). After 75 minutes or so of pursuing an episodic, semi-comic plot line, the film abruptly shifts moods when Emma discovers that she has terminal cancer. Terms of Endearment won Academy Awards for Best Picture, Best Director and Best Screenplay for TV veteran James L. Brooks making his first feature film, Best Actress for MacLaine, and Best Supporting Actor for Nicholson. It was followed by a sequel, The Evening Star (1996), which again featured MacLaine as Aurora.

Judith A. Dickerson
as Checkout Girl

Nancy Mette
as Woman at Party

Elaine McGown
as Herself
View All

Anyone who believes that television styles are new taking over the cinema -- or at least large sections of it -- will have their fears confirmed here.

It is impossible to resist the feeling of watching a long-running soap opera of which you have missed rather a lot of crucial episodes.

Terms of Endearment is that uncommon kind of American movie, the kind that doesn't just manipulate our feelings, but releases them.

It takes all of perhaps five minutes to fall in love with the leading characters in Terms of Endearment and from that point on, the audience is just putty in the extremely capable hands of writer-director James L. Brooks.

Terms of Endearment is about three relationships and students of screenwriting would do well to study the way in which these three stories are told completely and effortlessly in a movie of average length.

Its quirky rhythms and veering emotional tones are very much its own, and they owe less to movie tradition than they do to a sense of how the law of unintended consequences pushes us ceaselessly through the years, permitting no pause for perspective.

One doesn't begin to understand what exactly is Terms of Endearment: what does it represent or what is it trying to tell us? [Full Review in Spanish]

As tragedy moves in on Terms of Endearment during the last half hour, theatres will be awash with tears. That tragedy is a contrivance and terribly manipulative. But the characters have become too achingly familiar to warrant an easy dismissal.

Unfortunately, a good cry is often confused with a good film, and with each sob we forgive and forget lack of plot, superficial character development, unconvincing relationships.

If there were at least one woman in the film who found satisfaction in work of any kind, we might be reassured that this is... not a subtle arrow pointing us back in the direction of the bedroom and the nursery.

In his directorial debut, Brooks proves himself a master with actors.

A wonderful drama that finds a perfect balance between sweet, humorous and sad with sublime performances by the whole cast (mainly MacLaine and Nicholson), while the superb editing keeps the narrative always fluid as it spans several years in the lives of its characters.

Heart-warming, this classic chronicle about family problems and platonic love. Together with finest actings and an intelligent script, Terms of Endearment gonna make the most strong people cry.

A great film! So touching. Shirley MacLaine and Debra Winger both give great performances! I had originally given this film a 4/5 rating. However I have recently decided to bump it up to a 4.5/5. I will never forget this film...the acting, the story, the characters, the execution...it's an extremely well done film.

Spanning several years, this is the story of a mother and daughter, their sometimes intense love/hate relationship, and the quest each one goes through to find love, happiness, and acceptance. It was based on a work by Larry McMurty (which I fins surprising),and marked the directorial debit of James L. Brooks. It also won several Oscars, even though it only deserved a couple of them. This is a rather odd film tonally. It is listed as beign a romantic comedy-drama, and, while there are some moments of humor, it mostly comes off as a drama filled with pain and heartbreak, especially towards the end. It's a classic tearjerker. It's a good movie, and I did find it enjoyable, but I do think it's overrated and not a masterpiece or anything. The acting holds it together though, and that's the real reason to watch it. Shirley MacLaine is wonderful as the overbearing and out of touch mother Aurora. Debra Winger started off as a big annoying, but got better in her role as Aurora's daughter Emma. Jeff Daniels appears in one of his earliest role's as Emma's philandering professor husband, but it is Jack Nicholson who is the most fun to watch as the boozy, womanizing former astronaut who is neighbors with Aurora and tries to have a more meaningful relationship with her. Like all of Brooks's films, this drags on a bit too long, but it's got some decent writing, and sometimes we all need a good cry. Give it a watch.