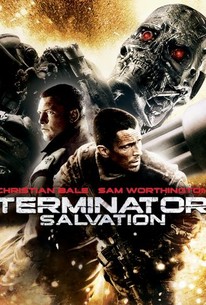 Critics Consensus: With storytelling as robotic as the film's iconic villains, Terminator Salvation offers plenty of great effects but lacks the heart of the original films.

Critics Consensus: With storytelling as robotic as the film's iconic villains, Terminator Salvation offers plenty of great effects but lacks the heart of the original films.

Critic Consensus: With storytelling as robotic as the film's iconic villains, Terminator Salvation offers plenty of great effects but lacks the heart of the original films.

The fourth installment of the Terminator series follows an adult John Connor (played by Christian Bale) as he attempts to organize a human resistance force which could prove to be mankind's last true hope in the war against the machines. Opening in the year 2018, Terminator Salvation finds John Connor's certainty about the future shaken by the sudden appearance of a mysterious stranger named Marcus Wright (Sam Worthington), whose last memory is of sitting on death row and awaiting execution. Unable to determine whether Marcus was sent from the future or rescued from the past, Connor begins to wonder whether there is still any hope left for the human race as the robots grow more powerful and aggressive than ever before. It appears that Skynet is preparing a devastating final attack designed to eliminate the human resistance once and for all, leaving Connor and Marcus with no choice but to strike back at the cybernetic heart of Skynet's operations. Once there, the two battle-scarred soldiers discover a devastating secret regarding the potential annihilation of all humankind. Anton Yelchin fills Michael Biehn's shoes as a young Kyle Reese in the first installment of a planned Terminator trilogy from director McG (Charlie's Angels). ~ Jason Buchanan, Rovi

Jadagrace
as Star
View All

It brings me very little joy to report that this version of the popular Terminator franchise is silly, obtuse, and pointless.

A shambolic, deafening, intelligence-insulting mess, a crushing failure on almost all counts.

Who cares what it means? Just make it loud. This is the way the series ends, not with a whimper but a bang. Except that it will probably go on, a shade of its former glory.

It's easy to see why Bale was attracted to this role, but this often fascinating actor gives one of his least interesting performances.

Terminator Salvation looks, sounds and tastes like a 2.50 fairground ride. There is nothing human about it. McG feeds you the sort of thrills that can be had on Clacton pier.

Put simply, Salvation has bold concepts and an interesting tone but the characters just aren't all that compelling.

A soulless, cynical film, designed only to mine a 25-year-old cash cow.

As lifeless as its cyborg villains.

I seriously thought my eardrums had burst a couple of times during Terminator Salvation. The movie sounds like jets crashing into a junkyard, one after another...

While the sights and sounds of the Skynet military forces hunting down the rag-tag army are all that an adrenaline-junkie could wish for, the human element falls flat.

A very good addition to the series, better than the 3rd. Full of near non-stop action through out. A whole new range of terminators are on show and there are some great SFX/ action scenes. Some might not like the plot as it does differ from the first 3 where the action is pretty much one on one. This is very much a full on war. Go see it.

This pointless sci-fi action war film doesn't add anything new to the universe of the series but is neither an embarrassment. In fact, the only thing that makes up for its sheer inconsistencies and lack of emotional resonance is Sam Worthington's complex character.

Boring, boring, and more boring. That is the one word I will always use to describe the fourth instalment in the "Terminator" franchise. "Not having Arnold back" really left this film stale, although Christian Bale and Anton Yelchin do bring enough enjoyable charisma to the table. Much further down the line after the third instalment, Judgement Day has happened and we get to see the world crumbling around them as Skynet and technology in general has taken over the planet. Throwing in one-liners that relate to the original film and having terrible cameos were pretty much the only things keeping this film connected to it's predecessor's, and that is a big problem for me. If you watch this film as a summer blockbuster you may find yourself having a blast watching the action and not caring about the story, but that is about the most credit I can give it. Since "T2: Judgement Day," these films have been going downhill very, very fast. What's next? Probably nothing good.

Was okay. . i didnt hate it like some but wasnt the great movie it could have been. This was the movie I think many original Terminator fans were wanting . . the battle in the future but it didnt live up to what we wanted.