Terminator 3 - Rise of the Machines 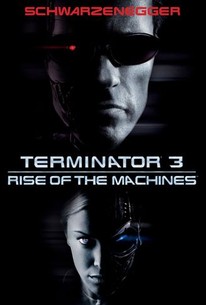 Critics Consensus: Although T3 never reaches the heights of the second movie, it is a welcome addition to the Terminator franchise.

Critics Consensus: Although T3 never reaches the heights of the second movie, it is a welcome addition to the Terminator franchise.

Critic Consensus: Although T3 never reaches the heights of the second movie, it is a welcome addition to the Terminator franchise.

Terminator 3 - Rise of the Machines Videos

Terminator 3 - Rise of the Machines Photos

The second sequel to the 1984 sci-fi action classic, Terminator 3: Rise of the Machines is the first film without the involvement of director James Cameron. Instead, Jonathan Mostow, the man behind Breakdown and U-571, has stepped in to fill the shoes left vacant by Cameron. In addition, the role of John Connor from the second film has been recast, with In the Bedroom's Nick Stahl taking over for Edward Furlong. Set ten years after the events of 1991's Terminator 2: Judgement Day, the film finds Connor living on the streets as a common laborer. Sarah Connor, his mother, has since died, and their efforts in the second film have not stopped the creation of SkyNet artificial intelligence network. As he will still become the leader of the human resistance, Connor is once again targeted by a Terminator sent from the future by SkyNet. This new Terminator, T-X (Kristanna Loken), is a female and is more powerful than any of her predecessors. To protect Connor, the human resistance sends a new T-101 (Arnold Schwarzenegger) back from the future. Also starring Claire Danes, Terminator 3: Rise of the Machines had its world premiere when it showed out of competition at the 2003 Cannes Film Festival.

Susan Merson
as Roadhouse Clubgoer No. 1

Elizabeth Morehead
as Roadhouse Clubgoer No. 2

Michael Papajohn
as Paramedic No. 1

Kiki Gorton
as Roadhouse Clubgoer No. 3

News & Interviews for Terminator 3 - Rise of the Machines

23 Fresh Movies and TV Shows Streaming on Netflix in April
Rank Arnold Schwarzenegger’s 10 Best Movies
Who Should The Aliens Fight Next?

View All Terminator 3 - Rise of the Machines News

Critic Reviews for Terminator 3 - Rise of the Machines

Terminator 3: Rise of the Machines tells the simple yet compelling story of a very old piece of equipment that refuses to go away. Its name is Arnold Schwarzenegger, and, as famously promised, he's back, and at his anticharismatic best, too.

Wastes no time getting very loud and very silly and never really lets up.

A sizable quotient of the movie's target audience just wants to see stuff destroyed, and in that regard Rise of the Machines won't disappoint.

It's not as taut or surprising as the first installment. And it's not as resonant or ambitious as the second, but Terminator 3: Rise of the Machines still manages to kick plenty of butt.

'Terminator 3: Rise of the Machines' is more than passable entertainment. [Full Review in Spanish]

Some interesting plot developments and a smashing (in both senses of the word) chase scene can't quite erase the familiarity of it all, but this is still a valiant effort by all concerned.

just because terminators are constructed, they are not always reconstructed.

Doesn't have the gritty feel of 'Terminator' or the sleek cutting edge of technology look of 'Judgment Day,' but it's a decent addition to the Terminator mythos.

There are bad sequels that still work as movies, basically. T3 doesn't even do that: it isn't a good action film, and isn't a good science fiction film.

Audience Reviews for Terminator 3 - Rise of the Machines

An unnecessary third movie that only repeats the formula of the one before, with unstoppable (and even tiresome) action for those who enjoy seeing cyborgs destroying an entire city - and it is easy to notice how it destroys the continuity of the series.

Unwanted and unnecessary, "Terminator 3: Rise of the Machines" is the third instalment of the "Terminator" lore, and while it does continue the franchise story leading up to Judgement Day, they go pretty distant from the first two films. Having Arnold back actually made this laughably bad, because he is almost parodying the best bits of the originals and fighting off a lady terminator. Getting rid of iconic characters like Sarah Connor by saying she died of cancer was such an easy way out that I just let it go, but when your film relies on cheap pyrotechnics and bad dialogue to drive the film, yeah, you're in for a real treat. In the end, "Terminator 3: Rise of the Machines" is not an insult to the originals, but more of an insult to your intelligence. It has a few nice moments, but the action is too dumb and the characters decisions are very questionable. This movie is meh at best, but on a pure entertainment scale, I have no proble turning my brain off to enjoy.

Almost a soulless robot from the future all by itself, many scenes from the first two simply reheated (with only Ah-nold's dubious charisma to deadlift this one off the ground into tolerable territory). Only this robot doesn't kill, it lulls you into a state of desultory complacency with a less than interested script. Stahl and Danes simultaneously convey excitement for being part of a franchise monster while being embarrassed reciting dreck.

Although many people bash this movie all the more so than the crap, straight-to-dvd-quality Terminator Salvation, this movie kept the Terminator atmosphere in place, sort of. The villain, although stronger than the 2nd, wasn't as menacing and frightening as the T-1000. There are a bunch of small gripes (And I mean a bunch) that end up making this movie a much worse movie that the first 2 Terminators, but at least it ain't Terminator Gayvation.

Terminator 3 - Rise of the Machines Quotes