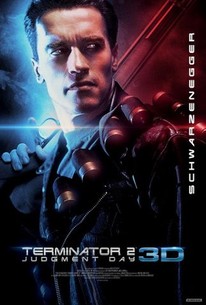 Critics Consensus: He's back -- and popping off the screen with explosive splendor in this presentational upgrade to one of cinema's most accomplished action extravaganzas.

Critic Consensus: He's back -- and popping off the screen with explosive splendor in this presentational upgrade to one of cinema's most accomplished action extravaganzas.

It has been 10 years since the events of Terminator. Sarah Connor's ordeal is only just beginning as she struggles to protect her son John, the future leader of the human resistance against the machines, from a new Terminator, sent back in time to eliminate John Connor while he's still a child. Sarah and John don't have to face this terrifying threat alone however. The human resistance have managed to send them an ally, a warrior from the future ordered to protect John Connor at any cost. The battle for tomorrow has begun....

Arnold Schwarzenegger
as The Terminator

Danny Cooksey
as Tim
View All

It's on a par with the 3-D in most current films of the genre.

One hell of a wild ride, a Twilight of the Gods that takes no prisoners and leaves audiences desperate for mercy.

It's a really exciting, well-made sci-fi picture, but I can't help feeling that this is one of the least needed sequels and franchises in movie history.

The movie's true power stems from [Cameron's] ability to tap into fears not just of mechanization and dehumanization (notions that Schwarzenegger embodies in his very persona) but also of human obsession and transformation.

A pure, uncut gem of an action film, featuring level of pacing that only serves to ramp up the intensity, the tension, and the payoff.

Terminator 2 is a testament to the cinema, with no fear of been ridiculous, that does not try to set absurd limits on its own monstrosity. [Full Review in Spanish]

Terminator 2 is a good movie, even if the kinder, gentler T-800 would unfortunately end up becoming the norm... But it's not as great as the original...

Incredibly, 26 years after its release, T2 stills feels fresh not only technologically but also thematically: threat of nuclear war, military weaponry, extreme ideology and the overwhelming sense that we're living on borrowed time.

It's still a classic movie that is still a fantastic piece of entertainment and, if you have 3D or 4K capabilities, you're probably going to pick this up anyway as the quality of this entry into the franchise has still not been diluted.

'T2' truly stands the test of time with a great story combined with smart, and efficient special effects that complement the narrative

Neil Soans
The Times of India

embodies all that is great about summer movie thrills while also weaving through the various chase scenes, shoot-outs, and massive billowing explosions a genuine sense of human feeling and moral concern

All these years later, it still has the power to thrill.

When you're a kid, movies definitely affect you in a different way. Most notably, one's prior experience colors the way we view the images we are presented with, and if you haven't had any experience to speak of, a movie beats reality to the punch. I don't remember how old I was when I first saw Terminator 2: Judgment Day, but I was very young. So young, in fact, that it might have been one of the first non-Star Wars and non-James Bond films I'd ever seen. When I noticed that there was a recent theatrical release in 3D, an almost primal impulse drove me to reconnect with a memory-making cinematic experience from my youth. Having never actually seen its predecessor until many years later, I never felt like I needed it to understand Terminator 2, and I still hold this opinion. It does everything that a good sequel, reboot, or remake needs to do: stand on its own despite its unoriginality. James Cameron understood marketability from very early in the summer blockbuster trend. He knew that star power with memorable dialogue set in an expansive sci-fi universe would equal box office magic. Lo, and behold, that formula still works to this day. Cameron wrote the book on modern action/sci-fi cliché, and we continue to eat it up without fail. Arnold Schwarzenegger is in his theatrical prime. Cameron is too, probably trying to rinse his creative palette after the disastrous production of The Abyss. This must have seemed like a cakewalk comparatively, considering the plot is a logical extrapolation of the first film's mythos (it's easier to write from an pre-existing IP), and no one had to risk drowning every day to perform basic stunt work. Retooling Arnold as the protector role was the smartest move they could have possibly made since he is likable even as a murderous cyborg antagonist. Between the larger than life star and director, we have Linda Hamilton's definitive role as Sarah Connor (oops, I forgot, there weren't any strong female action roles until Wonder Woman). Both she and the terminator have a satisfying amount of depth. She is regaining her humanity after years of mental abuse, fear of humanity's impending doom, and a militaristic need to protect her child. Arnold, of course, is an automaton who learns to feign emotion for the sake of others - with quips. However, the real VIP for my child self wasn't Arnold or Robert Patrick's bad-ass liquid CG man, it was Edward Furlong. Sure, he might not have ended up a DiCaprio-esque success story like Dane Dehaan, but he did have the similar eye bags of a true Sunny D-sipping Gen-Xer, and he was the cursing, jaded, truant punk that 10 year old me wanted to be. I know I'm not alone in that sentiment, but it's easy to forget when you grow up and are easily annoyed by smart-mouthed, little assholes like him. Watching the opening future war-zone sequence that kicks off the movie in 3D, I was blown away at the effort put into the restoration and subsequent detail of this theatrical cut. Every week we're sold another film re-purposed to the 3D format solely for the extra 4 bucks to be made off chumps looking to get the premium grade experience. Many of these films are comprised of so many excessive visual elements that they bewilder and nauseate more than inspire and enchant. This conversion/restoration by Studio Canal is really top-notch, as it is not only one of the best 3D renderings of a traditional 2D film but a meticulously crafted visual experience as well. So you can thank the French for restoring an American classic. The movie does have its flaws, admittedly. For instance, Sarah Connor's narration is hardly the through-line it was designed to be. Some of the humor is tonally inappropriate. The liquid CG looks more dated than nostalgia will excuse. But there is still a strong emotional undercurrent between Arnold, Furlong, and Hamilton that makes the explosions and melting dude worthwhile. What Cameron ultimately manages to accomplish is something that Michael Bay and Paul W.S. Anderson delude themselves into thinking they're always doing: make an adult action movie that still does justice to a child's imagination.