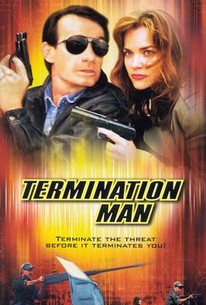 When America's safety is threatened, America's greatest secret agent comes to the rescue in an action-adventure yarn produced by Roger Corman. Yurdovich (Alexander Ilyin) is a notorious Serbian terrorist who has discovered a diabolical new weapon -- a super powerful nerve gas which can penetrate even the strongest gas masks and toughest anti-chemical suits. After Yurdovich takes out a platoon of American soldiers with the deadly gas and threatens to hit larger targets unless his demands are met, the U.S. security chief (James Farentino) calls in Dylan Pope (Steve Railsback), one of the free world's greatest undercover agents. Pope teams up with top agent Ed Marks (Eb Lottimer) and beautiful but ruthless field operative Delilah Shane (Athena Massey) as they set out to infiltrate Yurdovich's secret compound in the Adriatic Sea.

Yuri Korchevoi
as Peacekeeper
View All

There are no critic reviews yet for Termination Man. Keep checking Rotten Tomatoes for updates!

There are no featured reviews for Termination Man at this time.