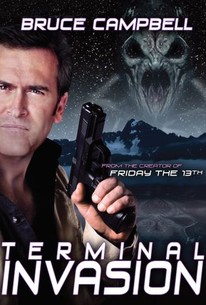 The setting for this nail-biting thriller is a snowbound rural airport. A group of outer-space aliens, disguised as human, take over the airport, in preparation of conquering the earth. The fate of mankind ultimately rests in the hands of two others trapped in the terminal: a fiercely combative female pilot named Cathy Garrett (Chase Masterson), and convicted murderer Jack (Bruce Campbell). The only problem is, with the aliens totally camouflaged as earthlings, no one can tell the good guys from the bad. Filmed under the title The Devil's Pass, Terminal Invasion made its American cable-TV premiere via the Sci-Fi Channel on September 14, 2002.

Chuck Byrn
as Del
View All

There are no critic reviews yet for Terminal Invasion. Keep checking Rotten Tomatoes for updates!

The presence of Campbell uplifts this otherwise lackluster film.