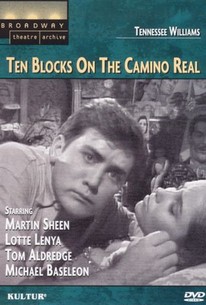 Jack Landau directed this 1966 televised production of Tennessee Williams' fantastical one-act play. In it, Martin Sheen stars as Kilroy, an American GI who finds himself in the surreal landscape of a fictitious Latin American nation where he interacts with several characters who have fallen into meaningless and destitute lives. The play also features performances by Tom Aldredge, Michael Baseleon, Albert Dekker, Hurd Hatfield, Kazimir Kokich, and Lotte Lenya.

Critic Reviews for Ten Blocks on the Camino Real

There are no critic reviews yet for Ten Blocks on the Camino Real. Keep checking Rotten Tomatoes for updates!

There are no featured reviews for Ten Blocks on the Camino Real at this time.