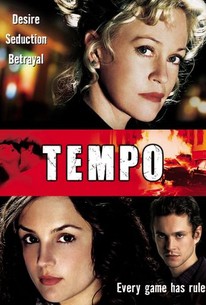 Love and larceny cross paths in an unexpected way in this direct-to-video thriller. Sarah (Melanie Griffith) is a U.S. expatriate living in Paris, where she makes a good living as a courier on the black market, smuggling for several clients including art collector Walter Shrenger (Malcolm McDowell). She is involved in a May-December romance with American Jack, but he betrays her by falling in love with Jenny (Rachael Leigh Cook), a beautiful American woman who works for an upscale jewelry store and knows how to access their safe. Jack begins an affair Jenny, setting up a dangerous and potentially explosive love triangle between the three; meanwhile, one of Sarah's smuggling jobs goes horribly wrong.

Virgile Bramly
as Paul
View All

There are no critic reviews yet for Tempo. Keep checking Rotten Tomatoes for updates!

There are no featured audience reviews yet. Click the link below to see what others say about Tempo!