Teenage Mutant Ninja Turtles II - The Secret of the Ooze1991

Teenage Mutant Ninja Turtles II - The Secret of the Ooze (1991) 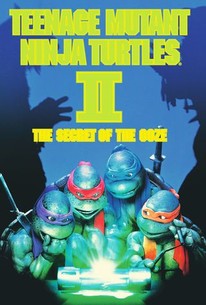 Critics Consensus: Not only is the movie's juvenile dialogue unbearable for adults, but the turtles' dopey and casual attitude towards physical violence makes them poor kids' role models.

Critics Consensus: Not only is the movie's juvenile dialogue unbearable for adults, but the turtles' dopey and casual attitude towards physical violence makes them poor kids' role models.

Critic Consensus: Not only is the movie's juvenile dialogue unbearable for adults, but the turtles' dopey and casual attitude towards physical violence makes them poor kids' role models.

The crime-fighting Turtles -- Michaelangelo (Michelan Sisti), Donatello (Leif Tilden), Raphael (Kenn Troum), and Leonardo (Mark Caso) -- return in this quickly made sequel to the popular superheroes' first film. The story concerns arch-enemy Shredder, who kidnaps nutty professor Jordan Perry David Warner, the man who invented the infamous ooze, in order to use the ooze to destroy the Turtles. Shredder enlists his hapless German shepherd puppy named Rahzar and a baby snapping turtle named Toko and dips them in the ooze to turn them into horrible and imposing ninja warriors. But on the Turtles' side is proficient kick-boxing pizza boy Keno (Ernie Reyes Jr.), who uses his moves to help the Turtles stop Shredder and his monster warriors. ~ Paul Brenner, Rovi

Vanilla Ice
as Himself

Everett Fitzgerald
as Dancer #3
View All

I don't think my negative reaction is a case of a parent forgetting the sort of mindless entertainment that he himself enjoyed as a child; rather the turtle fights are more depressing than joyful.

The artful grunge is gone -- and so's the edge. The whole movie is bright yet colorless

More dialogue-heavy and somewhat less frenetic, this sequel is somewhat more to my own taste.

One finds in them the same unabashed enjoyment of color and movement, of spectacular athletics and outrageous stunts, that animates the Hong Kong action cinema as a whole and makes it so superbly entertaining.

If the new film is considerably less imaginative than your average Punch-and-Judy show, it is, nevertheless, a step up from last year's turtle-fest.

The plot of Turtles II hinges on toxic waste and that turns out to be a pretty accurate description of the film.

I found myself sort of liking the turtles and you have to admit that "Cowabunga dude," is the perfect response to every question.

Nostalgia lens aside, it's a pretty crummy follow up to the 1990 movie.

Hellbent on being innocuous, high-spirited fun, but it just comes off as shrill and shallow and dimwitted.

While Michelangelo, Raphael, Leonardo and Donatello are the spunky, upstaging stars of the film, they also have a better cast and story to work with.

Sillier than the original and it's a little disappointing that they had to recast April, but still fun to watch. I can't say this is as good as the original because it feels like a step down, but I always enjoyed this one the most growing up and that still holds true. It doesn't take itself seriously at all, but still retains what makes TMNT fun (unlike number 3). There are times when they take the silliness too far, but overall it is pretty enjoyable and kids will most certainly love it. It has a special charm that is unexplainable to me.

The sequel to the cult children's film "Teenage Mutant Ninja Turtles" definitely loses the flare that made the first film so enjoyable, but the puns and choreography is more clever and dumb than ever, making this still a fun film to watch, even though you know you are viewing a pretty bad movie. Again, I respect anyone who bashes this trilogy, because I will have nothing to back it up, but the Turtles are just so loveable that you can't deny it's slight charm it has over you. The direction is fine, the acting is still hilarious, and the plot is even more preposterous this time around and the return of the main villain is never explained. I had a lot of fun watching this film, but I have no trouble admitting it is pretty lame. "Teenage Mutant Ninja Turtles 2: Secret of the Ooze" is not terrible, but if I return to the series, it will be to the original!

4 turtles and a canister of ooze is what's on the table in Michael Pressman's Teenage Mutant Ninja Turtles II: The Secret of the Ooze. Pizza too.

Cheesy, yet radically amusing is how the story plays out for its 80 minute entirety. Definitely, not as strong as its predecessor, but easily more entertaining. There isn't much in the way of character buildup, especially when all of the major characters have already gone through that in the first film.

While lacking emphasis on the individual weapons of the turtles, the martial arts segments have excellent choreography. The scenes at the end with music provided by Vanilla Ice is worthy of note. "Go ninja, go ninja, go!"

For 4 people in turtle costumes, the acting is what it is, backed by acceptable voice work. Paige Turco gets lost in the shuffle as April O'Neil. Ernie Reyes Jr. gets a chance to showcase top notch martial arts skills.

Teenage Mutant Ninja Turtles II: The Secret of the Ooze passes by as quickly as a ninja vanishes. Cowabunga!

I haven't seen this film in eons and good golly its dated heavily, there is some serious nostalgia here folks. Straight away in the opening credits I knew I was gonna like this, the small sequence montage in New York is simple but brings back many memories of the era...boom boxes!. From there we see a very young Ernie Reyes, Jr. sporting a stylish mullet and delivering pizza to an address. When he gets there he discovers its being robbed by a large group of masked men and decides to take a few of them on. First impressions...holy Air Nikes Batman! this kid got game!! he kicks ass and then some!. But more thugs arrive, its at that point the turtles stroll in behind Reyes (just out of focus), leap over his head, the image freezes and the classic Turtles logo/film title appears emblazoned across the screen in bright bold colours. It looks fantastic and is a glorious little moment to get you hyped. What I like about this silly film is the fact it follows on from the original perfectly. It starts from where the last film left off, the 'Foot Clan' are reforming, 'Shredder' has reemerged from his apparent death, the turtles are hiding out at 'April's' and everybody is talking about the events of the last film. So it feels very comfortable for the viewer, as if it were the next day in the adventure. Most of the cast have returned which is also a big plus, only April has been recast and 'Casey Jones' doesn't turn up at all which is a shame (no mention of him either which is the only continuity issue). The turtles themselves are pretty much the same, only Corey Feldman didn't return to voice 'Donatello' but the other voice actors remain. Visually the costumes are again the same but with small touch ups that enhance their appearance. The animatronic heads are much sharper this time around, the lips sync nicely with the dialog and the actors inside seem to have much more range in movement (amazed they can do backflips so easily!). The bad guys are awesome in this film, you gotta love 'Shredder', the guy just looks so damn cool in that outfit. I like that they haven't changed it either, if it ain't broke don't fix it, and it looks awesome. We don't really see 'Shredhead' do much this time but his presence is always felt, the dude only needs to look cool, that's all that's required. The Super Shredder sequence? videogame much?? its so totally in tune with the videogame aspect its untrue, utterly preposterous sure but visually so damn cool. I love how they hyped up his armour for that, even though it doesn't make any sense, why would his armour mutate? surely it would simply get destroyed as he grew bigger like the 'Hulk'. Meh it looks super awesome so who cares. The only let down for me (and everybody else at the time as far as I'm aware) was the lack of 'Bebop' and 'Rocksteady'. When Shredder gets hold of the ooze and turns two unknown creatures into monsters everybody was ready for Bebop and Rocksteady, who else could it be??. I remember my heart sank when they turned out to be these fresh newly created creatures. Despite the disappointment you can't deny they look terrific, a bit 'Godzilla-ish' in concept for one perhaps, and the other just seems like a big werewolf (possible idea rip from videogame 'Rampage' which was popular in the late 80's). The animatronic puppet work and bodysuits in this film are truly fabulous it must be said. Sure they all look rubbery and clumsy but its the craftsmanship involved that impresses, the detail, the facial movements, the time and effort put it. This is why films like this far outweigh many modern kids flicks because they are real, plus its all Jim Henson's Creature Shop work so that explains the high levels of quality. The first film was very enjoyable and to be honest I expected this to be a poor follow up. I'm still amazed today that this film is actually fudging tops!. It looks like a videogame in every scene but to a degree that's kinda what you expect really so no problem. Its a much lighter affair than the first film yet manages to show much better fight sequences (with less weaponry) probably down to the fact the costumes are better this time around. So yes its aimed more at kids this time with more slapstick and tomfoolery but its better in visuals, effects and characters if you ask me. A few downers aside like the hideous Vanilla Ice sequence and lack of Bebop and Rocksteady, this film delivers on pretty much every level offering some great comic book/videogame goodness that actually works! I just can't help but like it.