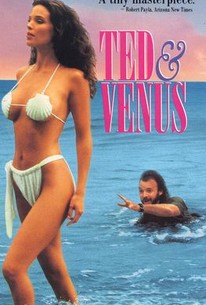 Bud Cort's directorial debut is a dark comedy about a romantic obsession that leads to tragedy, featuring a wide array of cameo performances including James Brolin, Carol Kane, Rhea Perlman, Martin Mull, Andrea Martin, Woody Harrelson, Timothy Leary, and Gena Rowlands. Cort is Ted Whitley, a local poet celebrity in Venice Beach, California, who spends his time drifting along the boardwalk and delivering his beat poetry inspirations at a local dive. As he sits on a pier composing his latest art work, a vision of incredible beauty --Linda Turner (Kim Adams)-- strolls by in a bikini and Ted is immediately smitten. Linda turns out to be the manager of the agency that Ted has used to try to find a new apartment. He flatters her with his attentions and his poetic rambles. For her part, she likes Ted but doesn't consider him romantic material. Ted misinterprets Linda's friendliness for amorousness and when Linda tries to back off from Ted, Ted cannot be stopped. His out-of-control obsession for Linda turns Linda's once-friendly demeanor into one of terror. But Ted continues stalking her until tragedy strikes.

Zoe Cassavetes
as Waitress with Attitude

There are no critic reviews yet for Ted & Venus. Keep checking Rotten Tomatoes for updates!

There are no featured reviews for Ted & Venus at this time.