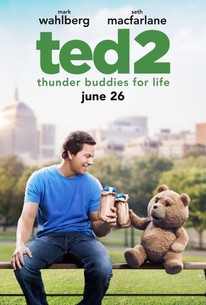 Critics Consensus: Ted 2 reunites Mark Wahlberg and Seth MacFarlane for another round of sophomoric, scatological humor -- and just as before, your enjoyment will depend on your tolerance for all of the above.

Critics Consensus: Ted 2 reunites Mark Wahlberg and Seth MacFarlane for another round of sophomoric, scatological humor -- and just as before, your enjoyment will depend on your tolerance for all of the above.

Critic Consensus: Ted 2 reunites Mark Wahlberg and Seth MacFarlane for another round of sophomoric, scatological humor -- and just as before, your enjoyment will depend on your tolerance for all of the above.

Ted (voice of Seth MacFarlane) ties the knot with Tami-Lynn (Jessica Barth), and recruits his best friend John (Mark Wahlberg) as a sperm donor in order to start a family in this sequel to the comedy hit about a teddy bear come to life. Later, when the Commonwealth of Massachusetts demands that Ted appear before a judge to prove he's a real person, the frisky bear and his pal vow to fight for their civil rights. Morgan Freeman and Amanda Seyfried co-star.

Sam J. Jones
as Himself

Kate McKinnon
as Herself

Bobby Moynihan
as Himself

Taran Killam
as Himself

Tiffany
as Herself
View All

Being awful is still no substitute for being funny - but Seth MacFarlane's talking teddy bear sequel does manage some laughs anyway.

The disappointment of Ted 2 isn't that the jokes are offensive ... but that they're lame, tired and peculiarly humourless ...

If you liked the first Ted film, which launched Seth MacFarlane's potty-mouthed teddy, you may still find the second offensive, not because of its daft man-child humour, but its ill-judged attempt at comic racism.

I can only say that whatever career notes MacFarlane has hit wrong recently, the Teds aren't among them.

It's hard to tell what, if anything, MacFarlane set out to achieve with Ted 2.

The movie is so indifferently plotted that it soon becomes a bore.

We get to hear a Dred Scott parallel made in relation to the plight of a CGI teddy bear.

It's odd to see such a mix of merciless humour and heartfelt schmaltz, but somehow it works in this riotous return to form for MacFarlane.

The filmmakers seem to have put as much effort into the plot as they did with the film's title, relying on terribly low-brow humor to keep things going.

The fate of "Ted 2" really boils down to one simple question: Will fans of "Ted" and MacFarlane be pleased? Probably.

Even though there's not much new in this installment...it's still fun to go slumming in Ted and John's world-for 115 minutes, at least.

It's funny and all, sometimes extremely funny, but it often seems as rough and worn as the plastic nose on Ted's face.

Johnny Gayzmonic
Fanboys of the Universe
View All Critic Reviews (203)

Where part one aimed low for its entire running time, they actually tried to tell a story and create a few softer notes this time, which works. Sure, there are still a lot of non-PC jokes and the movie quotes are the most fun, just like the Comic Con "showdown". But a few other moments are actually surprisingly sweet and not as toxic and cynic as the majority of the first time. A big step up.

Better than the first one. The Tom Brady and the sperm bank scenes are hilarious.

Family Guy creator Seth McFarlane always struck me as the type of humorist that had a seemingly endless amount of jokes. His animated show has been hugely successful for years and seems to have the ability that The Simpsons has, in terms of staying power and maintaining a high standard of entertainment. However, that ability to provide the goods is severely lacking from this second instalment. In order to make his marriage work, Ted (Seth McFarlane) and his new wife Lynn (Jessica Bartha) decide to have a baby and go looking for a suitable sperm donor. However, in the eyes of the law Ted is not a human and therefore unable to adopt or even for his marriage to remain legal, setting forth a struggle for him to prove his place in society. When he delivered Ted in 2012, fans of McFarlane's humour were happy with his transition into feature length and with a profane and anthropomorphised new character in tow, he was on to a winner. Ted was a comedy gimmick that worked and I was happy to see more when this sequel was announced. That said, this doesn't bring anything new to the table and is so boring you're likely to fall asleep halfway through our cuddly friend's one syllable name. The jokes (if you can even call them that) are regurgitated but this time they really don't stick. It's hard to imagine that the creator of Family Guy actually had anything to do with this. I'm not one who's easily offended. In fact, I actually welcome risquÃ (C) jokes but a film that has nothing more to offer other than how many black penises appear on the Internet every time you use a search engine frankly verges on racism and isn't even a funny gag the first time, never mind the third or fourth attempt. It's never a good sign when you feel the need to force out a few disingenuous laughs but I found myself doing that here. I was almost trying to convince myself that there was something here but I should've known from the start; the song-and-dance sequence alone is overlong and, ultimately, pointless and from the outset you get the feeling that McFarlane has started padding before the opening credits have even finished. Call me old fashioned but I was always under the impression that a comedy should actually consist of, erm... comedy. This whole, misjudged, cock-centric affair is absolutely bereft of humour and considering it's so overly concerned with the male genitalia it's actually quite limp and fails to perform when it matters. It only succeeds in being turgid, tedious and a hugely disappointing and desperate attempt to recreate it's predecessor's wonder and magic. This is a one trick teddy, overstuffed with a (fully justified) inferiority complex. Ted's inability to procreate echoed that of my feelings towards the film itself. To paraphrase wiser fellas than myself... it's a rocky place where my seed could find no purchase. Mark Walker