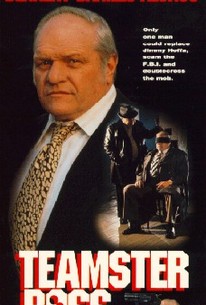 Teamster Boss: The Jackie Presser Story is a made-for-cable adaptation of James Neff's Mobbed Up, a real-life account about Teamster president Jackie Presser. Brian Dennehy plays Presser, who was Jimmy Hoffa's successor as president of the Teamsters. Like Hoffa, Presser was caught between the Mafia, the FBI, and his own ambitions, and the film follows his rise to power, as well as all the trials and tribulations that arose while he was president of the Teamsters.

Peter Bray
as The Animal

Richard Bright
as The Bomber

Steven Randazzo
as Joey "The Clown"

There are no critic reviews yet for Teamster Boss: The Jackie Presser Story. Keep checking Rotten Tomatoes for updates!

There are no featured reviews for Teamster Boss: The Jackie Presser Story at this time.